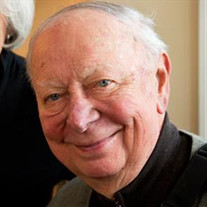 Avid fisherman, enthusiastic golfer and all-around amiable companion, Roger Mohr passed away peacefully surrounded by his family on May 6, 2021. Anyone who had the pleasure of a chat with Roger knows what a great listener he was. He made you feel like the most interesting person in the room, and if you were lucky, you would be privy to a good joke or two. If you were really lucky, you got a limerick or poem, which he was infamous for in his many professional addresses. Of his many pursuits and interests, golf predominated his life from youth to the end. He worked as a caddy at the Milwaukee Country Club throughout his teen years. He said it was a life-changing experience, as the Club sponsored him for an Evans Scholarship, which he was granted and allowed him to attend and graduate from Marquette University in 1953. He has supported and promoted this prestigious nationwide scholarship program ever since, serving as a director of the Western Golf Association for many years, and, then, as Chairman of the WGA, and, finally as a trustee. He always said he felt his involvement with the WGA and Evans Scholars program allowed him to give back to a program that so profoundly impacted his life. Following graduation, he served in the U.S. Army and then returned to Northwestern University for postgraduate work in Radio and T.V. He joined the Arthur Meyerhoff Associates, Inc. advertising agency in 1956 serving as President from 1965 until 1980. Meyerhoff was acquired by BBDO Worldwide in 1980, and Roger served as President of BBDO-Chicago in1980 and as Chairman from 1982 until 1990 when he was promoted to Vice Chairman International. He held that position until he retired in 1993. During his years with the agency, he held several positions in the American Association of Advertising Agencies in Chicago and nationally. His other involvements included serving on the Board of Directors of the Chicago City Ballet and the Off the Streets Club. He was a Governor of the Tavern Club and the Knollwood Club. His support of his community was equally strong. He served on a number of committees and commissions in the communities in which he lived. When living in Lake Bluff, he served as Chairman of the Lake Bluff Plan Commission, and then repeated that position on the Lake Forest Plan Commission when he moved to Lake Forest. He served as an Alderman in Lake Forest, 2000-2006 and continued to support the Lake Forest Senior Center as a member of its Foundation to the present. He was predeceased by his daughter Kristin and is survived by his wife of 62 years, Pauline (Spicuzza), his children Gregory (Christine), Mary, Tom (Raihan), and Kathy (Dave) Zerkle, and three grandchildren, Kieran, Mikaela and John Philip Ocean. A private Funeral Mass will be livestreamed at 11:30 a.m. on Saturday, May 15, 2021 on the Church of St. Mary Facebook page www.facebook.com/ChurchofStMaryLF/videos/. Interment will be at Lake Forest Cemetery. There will be a celebration of Roger’s life at future date to be announced. For information – Reuland & Turnbough Funeral Directors of Lake Forest, 847-234-9649 or www.RTfunerals.com. In lieu of flowers memorial contributions may be made to the Western Golf Association Evans Scholarship Foundation, 2501 Patriot Blvd., Glenview, IL 60026.

Avid fisherman, enthusiastic golfer and all-around amiable companion, Roger Mohr passed away peacefully surrounded by his family on May 6, 2021. Anyone who had the pleasure of a chat with Roger knows what a great listener he was. He made you... View Obituary & Service Information

The family of Roger J. Mohr created this Life Tributes page to make it easy to share your memories.

Send flowers to the Mohr family.