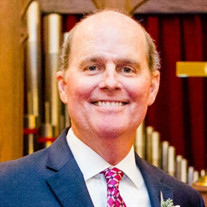 Surrounded by family, Brock Reid Gordon, 61, of Lake Bluff, IL passed away on March 12, 2019 due to complications from Multiple Myeloma. Brock was born May 21, 1957 in Lafayette, Indiana and raised in Muncie. He attended Muncie North Side and Indiana University’s Kelley School of Business, graduating in 1979. Brock is preceded in death by his father, Robert Reid Gordon and survived by his wife, Kim K. Gordon; two sons, Ryan Reid and Grant Edward (wife Emily); mother, Mary Joan Gordon; sister, Deborah Kniegge (husband Bill); sister-in-law, Suzanne Kaiser; and nephew, Matthew Reynolds. Brock’s athletic dexterity manifested at a very young age thanks to his father, a Muncie area sports mentor. Specifically, his tennis talents flourished in high school and were solidified at IU where he competed as a member of the men’s tennis team. In 1990, his accomplishments were recognized by Indiana’s Delaware County Athletic Hall of Fame which honors area athletes with strong moral character who excel at sports. As a dedicated brother to the Zeta Chapter of Phi Gamma Delta (FIJI), Brock was the quintessential embodiment of the fraternity’s values: Friendship, Knowledge, Service, Morality & Excellence. He will be remembered by hundreds of brothers as an extremely loyal and humble friend. In addition to his affiliation with FIJI, an integral part of Brock’s IU experience was his time serving for the IU Student Foundation and later the organization’s Steering Committee – a select group of exceptional senior leaders – where he met Kim, his wife, of almost 40 years. After living and working in Indianapolis, Cleveland, Pittsburgh and Peoria, Brock and Kim moved to Lake Bluff, IL in 1985 where Brock pursued a new opportunity with American Hospital Supply Corp. It’s here where they ultimately decided to start a family. Little did they know, Lake Bluff’s reputation for its spectacular Fourth of July parade and community’s firework celebration would become a cornerstone of their family’s life. Brock spent the last 25 years of his professional career in the automotive industry as an accomplished, outgoing and personable salesman and manager, most notably at Knauz BMW. During this time, he was nationally recognized on multiple occasions as part of an exclusive group of individuals who excelled in sales and customer satisfaction. In addition to his professional achievements, Brock joined the Lake Bluff Park District Board of Directors in 2012 where he served as Vice President and chaired several committees, allowing him to give back to the community he cherished. In this role, he was instrumental in keeping the Lake Bluff Golf Course open while ensuring fiscal responsibility for local taxpayers. His name and spirit will always represent great character and authenticity. A memorial service will be held for Brock on Saturday March 23, 2019 at 11:00am at Union Church of Lake Bluff located at 525 E. Prospect Ave, Lake Bluff, IL. A reception will follow immediately for friends and family to celebrate Brock's incredible life. In lieu of flowers, donations in his name can be made to the Multiple Myeloma Research Foundation at https://themmrf.org. For additional information contact Reuland & Turnbough Funeral Directors of Lake Forest (847) 234-9649 or www.RTfunerals.com.

Surrounded by family, Brock Reid Gordon, 61, of Lake Bluff, IL passed away on March 12, 2019 due to complications from Multiple Myeloma. Brock was born May 21, 1957 in Lafayette, Indiana and raised in Muncie. He attended Muncie North Side and... View Obituary & Service Information

The family of Brock Reid Gordon created this Life Tributes page to make it easy to share your memories.

Send flowers to the Gordon family.