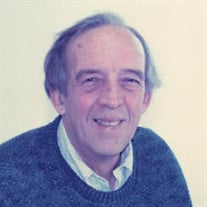 William “Bill” Harry Emerson, of Lake Forest, IL died on Sunday, November 7, 2021, after a long cruel battle with dementia. Bill was born on January 13, 1928, in Rochester, New York to Dr. William C. Emerson and Alice Emerson. He spent his childhood in Rome, New York and had fond memories of spending summers at “camp” at Lake Rondack in the Adirondacks. He attended MIT and graduated from Cornell University with a degree in classical literature. He also graduated from Cornell Law School. Bill served at the end of WWll in Italy as an Army Lieutenant, and in the Korean War as head of the Winter Warfare Unit in Japan. Bill spent his career as a litigating attorney for Amoco Corporation. He loved his work and enjoyed solving problems. Bill was a lifelong Episcopalian and was a member of The Church of the Holy Spirit in Lake Forest, IL. Bill was a renaissance man. He had a thirst for knowledge and could fix almost anything. He loved history, vegetable gardening, nature, reading, poetry, snow skiing, sailing, bicycling, cars, dogs, Emerson genealogy, Door County, Wisconsin and his family. A great day for Bill would be having a sail with his family on the waters of Green Bay in Door County, and ending the day with a good book and a beer in his hammock with his beloved standard poodle by his side. He is survived by his loving wife of 65 yrs. Jane E. Emerson; two daughters, Liz Ebeling (Michael) and Carrie Emerson-Price (Scott); and four grandchildren, Carolyn Ebeling (Rachel Gaylord-Miles), Mollie Ebeling, Carl Emerson-Price (Tonya) and Blake Emerson-Price; and two great grandchildren, Jolene and Adylene Emerson-Price. The family would like to thank his support team and wonderful caregivers: Carol Hyde-Basso, Mary Ortega, Maria Radyno, Maria Garcia, Ermie Dawis, Rose Iacanilao, Steve Doherty, Lorena Nehring, Dr. Smiley, Home Instead staff, and Guardian Hospice nurse, Tanya. In lieu of flowers, memorial contributions can be made to the ASPCA of Chicago and the Alzheimer’s Association of Chicago, 8430 W. Bryn Mawr, Ste 800, Chicago, IL 60631. A private memorial service will be held at a later date. Arrangements by Reuland & Turnbough Funeral Directors of Lake Forest www.RTfunerals.com (847) 234-9649.

The family of William H. "Bill" Emerson created this Life Tributes page to make it easy to share your memories.

Send flowers to the Emerson family.