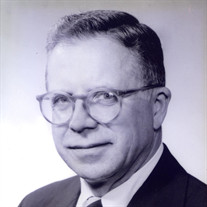 William Dalrymple “Dal” Frost, 90, of Lake Forest, IL died January 1, 2017. Dal was born in Minneapolis, MN on December 31, 1926 to Katherine N. Dalrymple and Jerome S. Frost. He grew up in Wayzata, MN. Dal was drafted into military service with the U.S. Army in the closing days of World War II. Trained for the invasion of Japan, he was spared combat by the surrender of Japan. Dal was deployed to Munich, Germany serving with the Rainbow Division, 3rd Military Government for Bavaria. Dal assisted with the repatriation of displaced persons from Dachau and other area concentration camps. In 1946, Dal was discharged at the grade of Sargent at Fort Sheridan, IL. In 1948, Dal and a friend from Wayzata bought a surplus army ambulance and drove from Minneapolis to Alaska on the Alaska Canadian Highway, the first year it was opened to civilians after the war. Dal spent a year working in Anchorage as a laborer. Dal returned to Minnesota and began a life-long career in the newsprint sales business, starting with Minnesota Ontario Paper in 1950. Dal moved to the Chicago area in 1953 working for Great Lakes Paper. Dal retired as President of the Canadian Pacific Newsprint Division. In 1953 Dal met and married Mary Bannerman Frost. They were happily married for nearly 62 years until Mary’s death in 2015. Dal was the proud father of Katherine “Katie” Frost (David) Bibbs of Lake Forest, IL and Will Frost (JoEllen Lottsfeldt) of Anchorage, AK. Dal had three grandchildren, Mary Bibbs and Will Bibbs of Lake Forest, IL and Sophie Frost of Brooklyn, NY. Dal was close to his sister, Diane Wick of Homer, AK, writing letters to each other on a weekly basis. Dal and Mary enjoyed extensive travels together, visiting Alaska, Europe, Africa, Middle East, China, Southeast Asia, and South America. Dal was extensively active in community service, and helped many people in need. Dal served on the Board of Directors of NICASA, ChildServ, Hazelton, Youth Communications and the Bannerman Foundation. Dal was also a member of Onwentsia Club for 57 years and long time member of the Angler’s Club of Chicago. He was a friend of Bill W’s for over 45 years. Family was very important to Dal, and he loved spending time with his family in northern Wisconsin and visiting his extended family in California. A memorial service with Military Honors will be held at 3 p.m. on Friday, January 20, 2017 at Onwentsia Club, 300 N. Green Bay Road in Lake Forest immediately followed by a reception. Jackets required, no denim please. Private interment. For information contact Reuland & Turnbough Funeral Directors of Lake Forest, (847) 234-9649 or RTfunerals.com. In lieu of flowers, contributions may be made in memory of Dal to NICASA’s Bridge House, 31979 N. Fish Lake Road, Round Lake, IL 60073.

The family of William "Dal" Dalrymple Frost created this Life Tributes page to make it easy to share your memories.

Send flowers to the Frost family.