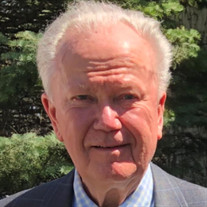 Ward Bruce Walquist, age 77, of Lake Forest passed away on the night of Sunday, May 30, 2021. Life-long husband of Beverly Walquist. Loving father of Cari Walquist, Chris Walquist, and Curt (Pam) Walquist, much loved grandfather of Nicholas, Anniina, Alexa, Evelyn, and Noelle Walquist and honorary and loved grandfather of Sarah Hruska and Lizzie Zavitz. Born in Chicago on October 18, 1943, Ward, grew up and attended school in Chicago’s Edgebrook neighborhood on the north side. He and Beverly met in the third grade. He attended college at University of Illinois – Champaign/Urbana and graduated from University of Wisconsin-Whitewater. He married Beverly (nee Miller) in 1964. While partnering with Beverly to raise his family, he built a successful business in the industrial supply industry and was a respected businessman and executive. Ward enjoyed spending time with Beverly and family. He enjoyed watching the Chicago Bears, for which his father played, but he loved playing golf most of all. Throughout his life he maintained a quiet reserve but once opened there was clear and obvious evidence of a positive attitude, honor, integrity, and a strong sense of family – he put family above all else. It was these attributes along with his dry wit and sarcastic sense of humor that endeared him to many. While his Parkinson’s diagnosis in 2008 brought many lifestyle changes and challenges, he was never one to complain and selflessly gave of his time to his family. He will be remembered mostly as a devoted husband and father and a loyal friend. He and Beverly were truly soulmates. His daughter, sons, and grandchildren were his greatest source of joy, and his spirit will live on through them. The family would like to thank the loving and caring aides who helped to care for Ward in his last days; especially, Teresita, Juan, Ricardo, and Carol. Interment and remembrance luncheon are private. In lieu of flowers, memorial contributions may be made to Colonial Williamsburg Foundation, c/o Mrs. Doris Salem, P.O. Box 1776, Williamsburg, VA 23187-9910. For additional information contact Reuland & Turnbough Funeral Directors of Lake Forest, Illinois 847-234-9649 or www.RTfunerals.com.

The family of Ward B. Walquist created this Life Tributes page to make it easy to share your memories.

Ward Bruce Walquist, age 77, of Lake Forest passed away on the...

Send flowers to the Walquist family.