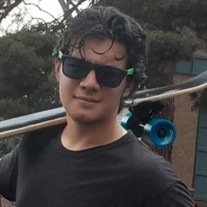 Ulrik Magnus Pedersen—son, brother, uncle, friend and talented gamer—died on Thursday, May 28th at his family home in Lakewood, Colorado. He was 17 years old and a Junior at the Early College of Arvada. Born on November 20th, 2002 in Lake Forest, Illinois to Michel and Peer Pedersen, Ulrik was intellectually advanced and began devouring books at a young age. As he grew older, he became an avid lover of Manga and Japanese Animé, snowboarder, long boarder, video gamer, DJ and astute connoisseur of military history. Ulrik was also a proud member of St. Jude's Catholic Church where he received confirmation and served as an altar boy and usher. At the age of five, Ulrik began practicing the art of Brazilian Jiu-Jitsu along with his younger sister Annelise. Over the years he became highly skilled and was the holder of a blue belt. He competed on several occasions and was a dear member of the Easton Training Center. He flawlessly picked up snowboarding, became a member of the Eskimo Club and placed third in his first snowboarding competition. He was recognized for his contributions to the nationwide initiative of the NASA Hunch Program which was designed to inspire students through a project-based learning program. He also conducted a presentation on Civil Engineering and Flood Prevention for both Jefferson and Adams County. Ulrik's dream was to have a degree in the fields of Bio-Engineering and Genetics and be a leading expert in the eradication of disease and chronic illness. He is survived by his parents; his younger sister, Annelise; his three older brothers, Peer, Parker and Derek; his nephew Jonathan; his maternal grandfather, Lolo (Marcelino De La Cruz) and his maternal grandmother, Lola (Mercedes De La Cruz). Private family services will be held.

Ulrik Magnus Pedersen&#8212;son, brother, uncle, friend and talented gamer&#8212;died on Thursday, May 28th at his family home in Lakewood, Colorado. He was 17 years old and a Junior at the Early College of Arvada. Born on November 20th, 2002... View Obituary & Service Information

The family of Ulrik Magnus Pedersen created this Life Tributes page to make it easy to share your memories.

Send flowers to the Pedersen family.