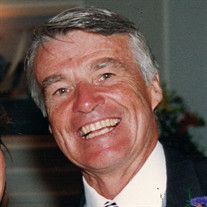 Thomas Patrick Ward Tom Ward, 86, passed away peacefully in the presence of his loving wife, Margie, family and close friends on Saturday August 26, 2017. Tom was born in Milwaukee, Wisconsin on March 17, 1931 to Dahlia and Thomas “Leo” Ward and he had one younger sister, Ann (Amacher.) He graduated from Wauwatosa High School in 1949 and went on to graduate from the University of Wisconsin in 1953 with a degree in Mechanical Engineering. In high school, Tom captained his basketball team to the Wisconsin State Championship in 1948 and he continued his basketball career playing for the Badgers at the University of Wisconsin. Tom spent 2 years in the army before he returned to the University of Wisconsin to secure a degree in law. In 1961, he met and married the love of his life, Margie. They were happily married for 56 years raising their four children in Lake Forest, IL. Upon graduation from law school in 1957, Tom began practicing law in Chicago. Four years later, he became Vice President of International Operations for Skil Corporation, and he and Margie moved to Breda in the Netherlands. In 1965, they returned to Chicago where Tom would return to practicing law and where he remained a practicing lawyer until he retired. Tom was an avid golfer, twice earning the title of Club Champion at Knollwood Club. Aside from being a passionate sports fan, partial to the Green Bay Packers and any sports team donning the Badgers logo, Tom was also very fond of poetry, music, theatre and bridge. He was a fierce competitor recognized for his fair and open-minded approach. Tom was loved and respected by his children and grandchildren. He is survived by his wife, Margie, and his children Jenny (Wylie Collins), Pat (Laurie), Sheila (Joe Lamb) and Mary (Chris Bires.) In addition, he has twelve adoring grandchildren, Kelsey, Ross, Megan, Nick, Grace, Mike, Tommy, Lucy, Elizabeth, Maggie, Kevin and Sarah. A mass celebrating his life will be held on Friday, September 1 at 10:00 a.m. at the Church of St. Mary, 175 East Illinois Road, Lake Forest, IL. In lieu of flowers, donations may be sent to JourneyCare (www.journeycare.org) in Glenview or the Alzheimer’s Association (www.alz.org) in Chicago.

Thomas Patrick Ward Tom Ward, 86, passed away peacefully in the presence of his loving wife, Margie, family and close friends on Saturday August 26, 2017. Tom was born in Milwaukee, Wisconsin on March 17, 1931 to Dahlia and Thomas &#8220;Leo&#8221;... View Obituary & Service Information

The family of Thomas Patrick Ward created this Life Tributes page to make it easy to share your memories.

Send flowers to the Ward family.