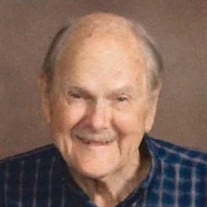 Thomas Richard “Dick” Larrison III, age 90, passed away May 30, 2022, in Woodstock, IL. He was born May 30, 1932, in Topeka, KS to his late parents, Thomas Richard, Sr. and Audrey Bertness Larrison. Dick served in the United States Army and then received his BS in Chemical Engineering from Denver University and his MS in Chemical Engineering from West Virginia University. He worked 30-years at Union Carbide Corporation followed by 10 years at the Jacksonville Electric Authority in Florida. Dick married Janet Fowler, a native of Glen Ellyn, IL, and together they had one son, the late Thomas William. After Dick’s retirement, he and Jan moved to Sun City in Huntley, IL where they were members of the Shepherd of the Prairie Lutheran Church. Dick was a music aficionado and was very talented singer in his own right. He loved classical music and opera. which was shown by his large collection of music. Dick was active in singing with several choruses throughout his life, he also enjoyed fishing, he was an avid Chicago White Sox fan, and was very proud of his Norwegian heritage. He is survived by his wife, Janet Larrison of Woodstock, IL; a sister Carol Holcomb of El Paso, TX; sister-in-law Barbara (Karl) Nagel; two nieces, four nephews and their families. Private services will be held. Memorial contributions in Dick’s name may be made to Shepherd of the Prairie Lutheran Church, 10805 Main St, Huntley, IL 60142. Arrangements by Reuland & Turnbough Funeral Directors of Lake Forest, 847-234-9649 or www.RTfunerals.com.

The family of Thomas "Dick" R. Larrison III created this Life Tributes page to make it easy to share your memories.