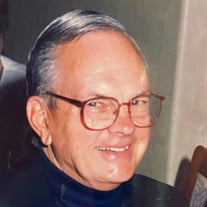 Stephen Dunn MacFarlan was a loving husband, devoted father, grandfather and great-grandfather, wisecracker friend, world traveler, and selfless volunteer. He left this world peacefully in his Mundelein home on October 28, 2021. Stephen was born on May 10, 1932 in Philadelphia, PA to Stephen and Elizabeth MacFarlan. He was raised and educated in the Philadelphia area. From all reports, he was a rascal and ever into mischief with his cousin Bud. After graduating from Lehigh University, he attended Officer’s Candidate School. He joined the Navy and sailed the seas which created his love for traveling the world. After his service, he married Esther Fow and raised his two children, Alan, and Debbie. He became the best grandfather to Alan, Whitney, Tanner, and Charlie. During this time, he worked for Armstrong World Industries. Sadly, after retiring, he lost his wife Esther. Later, he was introduced by a dear friend to Susan Corzatt and her four children, Rich, Katie, Meg, and Kurt. They were married and began a life traveling and sharing. Steve was a volunteer all his life and loved serving his church and the community. He was loved! Stephen is survived by his wife of twenty-five years Susan MacFarlan, daughter Deborah MacFarlan, son Stephen Allen MacFarlan (Mindy), grandchildren Alan, Whitney (Kevin), and Charlie. Great-grandchildren Tanner and Cameran, stepchildren Richard, Katie (Barry), Meg (Paul), and Kurt (Christa), step-grandchildren Sutton, Max, Carter, Lily, Winter, Griffin, Spencer, and Tyler. He is preceded in death by his parents Stephen and Elizabeth MacFarlan, his first wife Mary Esther MacFarlan, and beloved grandson Tanner Palmer. The funeral service will take place at First Presbyterian Church of Lake Forest, 700 N. Sheridan Road at 10:30 am on Friday, November 12, 2021. Interment will take place at the church memorial garden following the service. In lieu of flowers, Stephen requested donations be sent to Doctors Without Borders at https://donate.doctorswithoutborders.org/secure/donate. Arrangements by Reuland & Turnbough Funeral Directors of Lake Forest www.RTfunerals.com or (847) 234-9649.

The family of Stephen D. MacFarlan created this Life Tributes page to make it easy to share your memories.