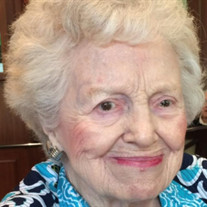 Rosealice Miller (nee Hill), age 99, of Lake Forest, died peacefully on the morning of Friday, September 3, 2021. Rosealice is survived by her daughters Beverly (Ward) Walquist and Beth (Fritz) Kroeger. She was the caring grandmother of Cari Walquist, Chris Walquist, Curt (Pam) Walquist, Matthew (Jen) Bryant and Kevin (Sue) Kroeger and granddaughter-in-law Terhi Walquist. She had 10 great-grandchildren: Nicholas, Anniina, Alexa, Evelyn, and Noelle Walquist; Madeline and Jack Bryant and Henry, Eleanor, and William Kroeger. She was preceded in death by her life-long husband John Robert Miller who passed in 2017, grandson, Kevin Bryant who passed in 2019, and son-in-law, Ward Walquist who passed in May 2021. Born in Janesville, WI on August 12, 1922, Rosealice grew up in Chicago. She attended North Park College on Chicago’s northside studying liberal arts. She married Jack in 1942 and raised her daughters Beverly and Beth in Chicago and Lake Forest. She regularly attended the First Presbyterian Church of Lake Forest and was very involved with Presbyterian Homes Westminster Place in Evanston volunteering for more than 33 years. She was part of the Women’s Board there and when she finally retired, she was granted Emeritus standing and had 5,254 lifetime service hours, a record held to this day. In addition to volunteering, Rosealice was very philanthropic significantly supporting the Presbyterian Homes - Geneva Foundation. In their early retirement years, Rosealice and Jack traveled around the world from Hong Kong to Mexico and all over Europe. Rosealice loved to play Bridge, read and dine out with family and friends. She will be remembered mostly as a woman who loved and was devoted to her family. The family would like to thank the loving and caring aides Teresita Smith, Adrianna Smith, Angella Robinson and Paulette Smith, who cared for Rosealice over the past seven years. Interment: Lake Forest Cemetery – Private In lieu of flowers, memorial gifts may be made to: Geneva Foundation of Presbyterian Homes 8707 Skokie Blvd. Suite 400 Skokie, IL 60077 www.presbyterianhomes.org/geneva-foundation For more information, please contact Reuland & Turnbough Funeral Directors of Lake Forest at 847-234-9649 or www.rtfuneral.com

Rosealice Miller (nee Hill), age 99, of Lake Forest, died peacefully on the morning of Friday, September 3, 2021. Rosealice is survived by her daughters Beverly (Ward) Walquist and Beth (Fritz) Kroeger. She was the caring grandmother of Cari... View Obituary & Service Information

The family of Rosealice Miller created this Life Tributes page to make it easy to share your memories.

Send flowers to the Miller family.