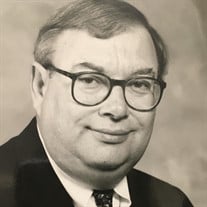 Robert Earl Allgyer, beloved husband of Sarah Ross Allgyer, passed away peacefully on July 6, 2017 in Lake Bluff, IL. He was born on October 1, 1944 to Dorothy and Kenneth Allgyer in Mattawana, Pennsylvania. Bob graduated from Westminster College with a degree in Business Administration in 1966. Immediately after college, he joined Arthur Andersen & Company in Chicago where he began as a CPA in the audit practice. After becoming Partner in 1976, Bob began to serve on many of the firm's largest audit and tax clients in Chicago, including Abbott Laboratories, Sara Lee Corporation, R.R. Donnelley & Sons, Carson, Pirie, Scott & Co. and Montgomery Ward. Bob was a leader in client service and development and was Chicago's lead representative on the Global 1000 Leadership Team for Andersen. One of Bob's proudest accomplishments was being a founder of the "Masters Program" in Chicago which identified high potential partners and exposed them to an accelerated learning continuum on business, cultural matters and relationship skill building. He took an interest in everyone's career development, and he was a great mentor to many Chicago office partners. After 35 years, Bob retired from Andersen as a Senior Partner in 2000. Outside of the office, Bob was an avid golfer and hunter (often with one of his Labrador retrievers), and he was a passionate fan of every Chicago professional sports team. A firm believer in giving back, Bob was active throughout the greater Chicago community in various civic activities, including as a member of the Board of the Lyric Opera, Chicago Lung Association, Lake Forest Academy, Lake Forest College, Condell Hospital, Golden Apple Foundation, Juvenile Diabetes Association of Chicago, Metropolitan Family Services, and was the current treasurer of St. Andrew's Episcopal Church in Boca Grande, FL. Of all his many accomplishments in life, he was most proud of his family. He is survived by his adored Sally ("Sweets"), brothers Jim (Cindy) Allgyer and Bill (Margie) Allgyer, and his children, Sarah Allgyer Thomas, Robert Earl Allgyer, Jr. and Kenneth Ward Allgyer, as well as his two grandsons, Robert Henry Thomas and George Willett Thomas. In lieu of flowers, contributions can be made to the Boca Grande Health Clinic Foundation, P.O. Box 2340, Boca Grande, FL 33921, Lake Forest Country Day School, 145 N. Green Bay Road, Lake Forest, IL 60045, or a charity of your choice. A service will be held on Tuesday, July 11 at 4:00 p.m. at the Church of the Holy Spirit, 400 East Westminster in Lake Forest.

The family of Robert Earl Allgyer created this Life Tributes page to make it easy to share your memories.

Send flowers to the Allgyer family.