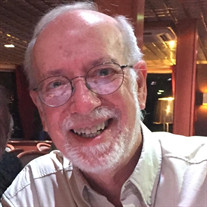 Richard James Horn, 78 years old. This man was loved. By his wife of nearly 54 years, by his eleven siblings, their spouses and twenty-five children plus their families, by his in-laws and their families, by his friends, even by people who knew him more casually, judging from the phone calls and emails and texts and letters I’ve received. I liked to say he was the good-est man I knew. He was so good, so ethical. So generous. So smart. And funny? His self-deprecating, quick wit blindsided us every time. And let’s just for a minute talk about how handy and clever he was with envisioning spaces and then creating them with his tools. Renovated eight homes. He read voraciously. He was sweet to our cats. But to be honest? He was a bit of a slob. It was simply easier to close the door to his office than to deal with the perpetual mess. His curiosity for geography, history, and travel: boundless. He wanted the world and people in it to be just, but he knew it was a pipe dream, even finding dark humor in the disconnect. As an economist, he couldn’t stand it when systems didn’t work the way they should. He tried to fix them, even if it meant needling the people in charge. Especially if it meant needling the people in charge. What a life we had together. Curious. Adventurous. Intelligent. Fun. I could give you his biography, tell you about his education, jobs, accolades, list the names of all the people who mattered to him, but it would go on for days. And a biography isn’t the measure of a man anyway. Today, his second day of being dead, I returned to our bedroom again and again to pick up his pillow and hug it tight to my chest. Fifteen times I must have done this; twenty, maybe. It still smells good, like him. I did the laundry except for the shirt he wore to the hospital. Maybe it will retain his scent a little while longer. If you care to make a donation, send it in Dick’s name to your favorite cause. Spread the wealth—wouldn’t that tickle him! We’ll plan a celebration sometime later, when we can smile again, and share stories about this wonderful guy. For now, we mourn. For more information – Reuland & Turnbough Funeral Directors of Lake Forest, 817-234-9649 or www.RTfunerals.com

The family of Richard J. Horn created this Life Tributes page to make it easy to share your memories.

Send flowers to the Horn family.