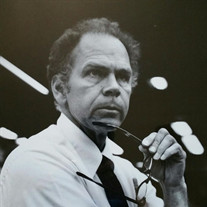 Raymond “Ray” Ellsworth Smith, Jr., age 95, of Lake Bluff and formerly of Lake Forest, died April 18, 2019. He was preceded in death by his wife of 44 years, Lorraine B. (nee Adams) Smith. Son of the late Raymond E. Smith, Sr. and the late Jutta Marie Jensen. Brother of the late Shirley Pryor and the late Dagmar Smith. Father of Dana Pacewicz, Leslie Miller, Maggi Smith and the late Raymond “Bo” Smith. Grandfather of Justin Smith, Holly Kobzina, Ryan Smith, Brooke Smith, Charles Davis, Treyvon Davis, Arian Davenport and Caitlin Miller. Great-grandfather to 17 great-grandchildren. Ray was retired after 66 years of business in the engineering and powered access industries. He was the former owner of Smith Tool Company, Up N Atom, and the R. E. Smith Corp. His design work in aerial lifting platforms was revolutionary and his patented machines made construction of the Alaska Pipeline, as well as other notable projects, possible. In 2015, he was honored with the International Lifetime Achievement Award from the International Powered Access Federation/Access International. Ray was a decorated fighter pilot, having served his country during World War II as a 2nd Lieutenant in the 358th Fighter Group of the Army Air Force. He piloted the P-47 Thunderbolt on missions in Northern Europe. On one mission, his plane was shot down over German-occupied France, and he spent five months in a prison camp at Barth on the Baltic. He was honorably discharged as a liberated prisoner of war in 1945. Ray was a life-long supporter of the Lake Forest community. He was a member of The Church of the Holy Spirit in Lake Forest and a choir member for 50 years. He was involved in many civic activities and helped start several local organizations, including Group For, the Lake Forest Club, the Lake Forest Volunteer Bureau and the Lake Forest Symphony. Ray was also an avid amateur photographer and spent countless volunteer hours producing photos for various Lake Forest High School athletic teams. His funeral service will be held at 2 p.m. on Friday, May 10, 2019 at The Church of the Holy Spirit, 400 E. Westminster, Lake Forest, IL 60045. In lieu of flowers, contributions may be made to The Church of the Holy Spirit Choir. Info – Reuland & Turnbough Funeral Directors of Lake Forest, www.RTfunerals.com or (847) 234-9649.

The family of Raymond Ellsworth Smith, Jr. created this Life Tributes page to make it easy to share your memories.

Send flowers to the Smith family.