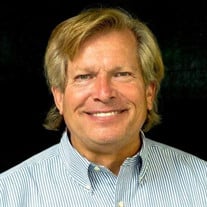 Paul J. Burt, 59, of Lake Forest Illinois, lost his long battle with cancer on July 7, 2020. He died comfortably and peacefully, surrounded by his loving wife and four children. If you asked one hundred people who Paul Burt was, they would all give you a different description. Paul was a poet and accomplished writer. Visionary. Auto enthusiast and guru. Faithful. Collector. Full of laughter. Potential politician. Survivor. Leader. Consummate entrepreneur. Philanthropist. Comedian. Charismatic. Talented photographer. Social media influencer. World War II fanatic. Fighter. Dreamer. Survivor of all odds. Paul was all of these things, but most importantly he was a beloved and admired father, a loving and doting husband, and newly appointed grandfather. His most proud accomplishment was the love and connection of his family, which will continue on for generations. Paul was born on September 5, 1960 in Philadelphia, PA. In the 1980’s, Paul worked in New York City to start his career in employee benefits, and also was a stand-up comic in NYC. He then moved to Chicago in 1991 where he developed many successful business ventures in employee benefits, technology, real estate, and automotive interests. In addition, Paul was a very faithful man and a philanthropist: a proud member of the Lumen Foundation, a founding member of the Lake Forest Police Foundation, a pre-marriage advisor with wife Janet for the Catholic Church, and Honorary Chair of both the American Heart Association Chicago Heart Ball, and the Citadel Theatre Gala. His company has earned awards in the Chicago Entrepreneur Hall of Fame, and the “National Best and Brightest Companies to Work For”. In addition, Paul had a following of over 30,000 automotive lovers on his Facebook page “The Burt Collection”, had an employee benefits podcast called Benefits-U, and in August 2018 Paul participated in a podcast on Venture with Virtue with Jay Tremonte titled “Overcoming the Fear of Death”, which can be heard at https://www.owltail.com/podcast/f5nXc-Venture-with-Virtue/episodes. Paul is survived by his father Paul C. Burt of Savannah, GA, his mother Clarissa Guinan of Cave Creek AZ, and his two sisters Clarissa Burt and Carol Berry, both of Cave Creek, AZ. In 1995, Paul married the love of his life, Janet Deptuch Burt and they were married for almost 25 years. Paul’s pride and joy were his four children. He is proudly survived by his daughter Erica Burt of Nashville, TN, who recently delivered Paul’s first grandson, named Ford Paul, on March 8th. He is also survived by his son and daughter-in-law Brian Burt (Haley Kenefick Burt) of Austin TX, who are expecting Paul’s second grandson in August. In addition Paul was survived by his daughter Sophia Burt and son Hudson Burt, who both attend Lake Forest High School. Paul was also survived by the countless extended Deptuch and Burt family members, and many friends who revered and loved him very much. Due to restrictions of Covid-19, on July 25, 2020 there will be a private, invitation only mass at the Church of St. Mary in Lake Forest, Illinois, followed by a private family interment at the Memorial Gardens at Lake Forest Cemetery. As a celebration of Paul’s life, please share again your favorite memories, thoughts, stories, tributes and photos with our family at https://www.rtfunerals.com/obituaries/Paul-Burt-2/. The following link can be used to view the live stream of Paul's Funeral Mass. https://asimplestreaming.godaddysites.com/burt In lieu of flowers, please consider a donation to a memorial fund in Paul's name at this link: http://gofundme.com/f/paul-j-burt-family-memorial-publishing-fund

Paul J. Burt, 59, of Lake Forest Illinois, lost his long battle with cancer on July 7, 2020. He died comfortably and peacefully, surrounded by his loving wife and four children. If you asked one hundred people who Paul Burt was, they would... View Obituary & Service Information

The family of Paul J. Burt created this Life Tributes page to make it easy to share your memories.