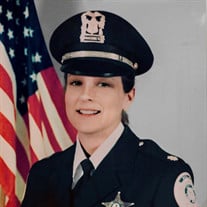 Patricia Lord, of Hawthorn Woods, IL died peacefully, December 23, 2021, at the age of 69, after a lengthy battle with cancer. She was born in Evanston, IL and raised in Glenview, IL , graduating from Glenbrook South High School and later obtaining a degree from DePauw University in 1974. In 1976 she joined the Lake Forest Police Department and began her long and distinguished career spanning from a patrol officer, state certified juvenile officer, detective, sergeant, commander and finally deputy chief of police before retiring in 2004 at the age of 52. She was a trailblazer. When joining the department, female police officers were a rarity. She had to wear male shoes, pants and shirts as no female uniforms existed. Women's locker room facilities only became available in the 1990's. None of these challenges deterred her from becoming the longest-serving female Lake Forest Police Department has ever had and only the second female deputy chief ever appointed in Lake County. Pat had a great sense of humor, a strong love of family and animals. Several times over her career, she would arrive home with a rescued dog or bird that was adopted into the family. She spent her retired years cruising the world and building a business around her particular fondness for antiques. Searching the internet, estate sales and auctions she sought out the best deals and turned this love of antiques into a successful internet business spanning over 20 years. She is survived by her husband Bruce, her three stepchildren whom she raised as her own - April (Tim), Adam (Rebecca) and Amanda, nine grandchildren, her brother Richard Spain (Nancy) and sister Susan Johnson (Steve). Internment will be private at Lake Forest Cemetery in Lake Forest, IL. For more information, contact Reuland & Turnbough Funeral Directors of Lake Forest at 847-234-9649 or www.RTfunerals.com

Patricia Lord, of Hawthorn Woods, IL died peacefully, December 23, 2021, at the age of 69, after a lengthy battle with cancer. She was born in Evanston, IL and raised in Glenview, IL , graduating from Glenbrook South High School and later... View Obituary & Service Information

The family of Patricia S. Lord created this Life Tributes page to make it easy to share your memories.

Send flowers to the Lord family.