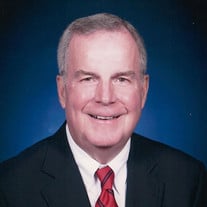 P. Michael “Mike” Hoch, 82, of Lake Forest, IL died November 14, 2020. He was born on September 12, 1938 in Richmond, Indiana, a city that remained close to his heart. Mike graduated from the University of Notre Dame in 1961 where he was a football recruit and ran track for his beloved Fighting Irish, a love he engrained in his family. After marrying Susy Keenan in 1960, Mike began working for his father’s insurance agency. In 1971 he moved his family to Lake Forest, Illinois to begin a long and successful career in the investment business. Mike was faithful to our Lord and had a servant’s heart. He was active in his parish, St. Mary’s Church, devoted to Catholic Charities of Lake County, founding the Catholic Charities Annual Golf Classic, and served on the board of the Notre Dame Club of Naples, Florida. One of his most memorable life experiences was helping Vietnamese families relocate to the Chicago area. In Mike’s later life he took great pride and joy in seeing his children start their own families, watching his 8 grandchildren participate in various sports and activities, and interacting on FaceTime with his new great-grandson. Mike is survived by his loving wife of 59 years, Susy Keenan Hoch, his four children, Patrick Hoch, Katy (James) Rogers, John (Eileen) Hoch, and Nancy (Tim) Bielinski, grandchildren Keenan (Megan Crymes) Rogers, Sam Rogers, Lily Bielinski, Jack Bielinski, Gavin Hoch, Sean Hoch, Brendan Hoch, Ryan Hoch, great-grandson Eoin Rogers, and brother Jim (Carol) Hoch. He is preceded in death by his sister, Nan (Tom) Swanson. He will be remembered for his love of God, family, friends, Notre Dame, the center of the universe-Richmond, Indiana, and his endearing little giggle. Due to COVID-19 restrictions with facilities and gatherings, services will be private and by invitation only. The Funeral Mass will be live streamed on Monday, November 23, 2020, at 11:30 am. You may view the service on the Church of St. Mary-Lake Forest Facebook page https://www.facebook.com/ChurchofStMaryLF/videos/. We appreciate your understanding and regret that we are not able to gather in person. In lieu of flowers donations may be made in Mike’s name to Catholic Charities of Lake County 671 S. Lewis Avenue, Waukegan, IL 60085 or Kindred Hospice,85 W. Algonquin Road, Suite 100, Arlington Heights, IL 60005.

The family of P. Michael "Mike" Hoch created this Life Tributes page to make it easy to share your memories.

Send flowers to the Hoch family.