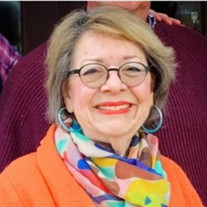 “And though she be but little, she is fierce.” William Shakespeare Mary “Noni” Gardner, may have been relatively small in stature but everything about her was fierce. She loved fiercely, laughed fiercely and lived her life fiercely. She left this world in a whirlwind, with her children and husband at her side. When she passed from this world to the next on May 31, 2020, she knew how much she was loved and the legacy she would leave behind in her children and grandchildren. True to form, Noni was born in the middle of a hurricane on October 16th, 1944 in Jacksonville, Florida. While she spent the majority of her life outside Florida, there were few things she loved more than the wide expanse and beauty of Jax beaches. She attended Ferry Hall (now Lake Forest Academy), American University and graduated from Roosevelt University with a degree in Art History and Journalism. Her unique sense of style, impeccable eye for detail and her love of art served her well as an interior decorator. In fact, she was still sketching kitchen designs by hand on vellum up until her death, which in today’s computerized world, is considered an art form. Noni was many things, but man was she funny. When she started laughing, you could hear her down the hall and she often had the entire room cracking up as she carried on. She and her gal pals loved being “naughty” and she secretly had a mouth that could make a sailor blush. Her biggest love in life was truly her family. She beamed talking about her children and could spend countless hours playing with her granddaughters. She was a fixture at many of her children’s athletic events, often sporting an impossible to miss bright red coat while yelling embarrassing nicknames to urge them on. She was an amazing cook, entertainer and later in life became an avid baker. She delighted in baking treats to send off to her granddaughters and sons in law. Noni’s life was marked by her fierce devotion to both her family and her faith. She was a pillar in the Church of the Holy Spirit and served in various positions, including the Vestry. Noni was a trained Stephen’s Minister and had a passion for bringing Christ’s love and care to people at a time of need. She later became head of the Healing Prayer Ministry, laying hands on people and praying with them. She is survived by her husband of 36 years, Bill, and children; Catherine Buell (Daniel) of Chatham, NJ, Carrie Ravagnie (Ryan) of Lake Forest, IL and William Gardner of Libertyville, IL. She leaves behind a legacy in her granddaughters: Bailey and Summer Buell; Lydia and Millie Ravagnie. She is also survived by her siblings, sisters Susan Grove and Jamie Lou Henwood and brother Hampton Holcomb and numerous nieces and nephews. She was predeceased by her beloved brothers the late James Holcomb, Jr. and the late David Harrington. Private family services will be held and public memorial service will be held at a future date at The Church of The Holy Spirit in Lake Forest. In lieu of flowers donations may be made to The Church of the Holy Spirit - Mission & Outreach, 400 E. Westminster Road, Lake Forest, IL 60045. For information - Reuland & Turnbough Funeral Directors of Lake Forest, 847-234-9649 or www.RTfunerals.com.

&#8220;And though she be but little, she is fierce.&#8221; William Shakespeare Mary &#8220;Noni&#8221; Gardner, may have been relatively small in stature but everything about her was fierce. She loved fiercely, laughed fiercely and lived her... View Obituary & Service Information

The family of Mary "Noni" Gardner created this Life Tributes page to make it easy to share your memories.

“And though she be but little, she is fierce.” William Shakespeare...

Send flowers to the Gardner family.