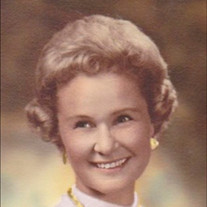 Mary Steurer McKendry, MD died peacefully on July 22, 2016 with family at her side at the age of 89. Mary was born in Rockford, Illinois, March 22, 1927. She was the daughter of the late Justin Steurer, MD and Wilhelmina (Schweikherx) Steurer. She is survived by her brother Dr. Justin C. (Beverly) Steurer. Mary loved her parents dearly and maintained a close relationship with them throughout their long lives. She took care of them in their old age. Mary was an outstanding student, Valedictorian of her high school class and an accomplished pianist. Mary graduated from Northwestern University Medical School in 1952. She became a physician at a time when few women were admitted to medical schools. She was one of only two women in her graduating class. In 1952, Mary married Robert E. McKendry MD by whom she is survived. Mary and Robert moved to Joliet where they raised their six children and practiced medicine during their sixty-four years of marriage. Mary had a strong Catholic faith and she lived its teachings. Mary lived her life in the service of others. She gave selflessly to her husband, children, patients and community. She loved to laugh and have fun with her family and friends. She had a lively intellect, always learning and growing. She loved music. She enjoyed the beauty of nature. Mary is survived by her husband of sixty-four years, Robert E. McKendry, MD. She is also survived by her six children: Robert (Paula) McKendry, Mary (John) Bernhard, Justin (Albem) McKendry, MD, John (Kauri) McKendry, Martha McKendry, and James (Belinda) McKendry. Mary is also survived by her fourteen grandchildren: Ian, Drew and Grace McKendry, Nancy and Paul Bernhard, Justin, Michael, Jennifer, Mary and Molly McKendry, Chloe, and Justin-Etienne McKendry, Alan and Carla McKendry. Mary McKendry, a life well lived in the service of others. She embodied love and compassion for others and loved and trusted our Lord to guide her throughout her life.

Mary Steurer McKendry, MD died peacefully on July 22, 2016 with family at her side at the age of 89. Mary was born in Rockford, Illinois, March 22, 1927. She was the daughter of the late Justin Steurer, MD and Wilhelmina (Schweikherx) Steurer.... View Obituary & Service Information

The family of Mary S. McKendry created this Life Tributes page to make it easy to share your memories.