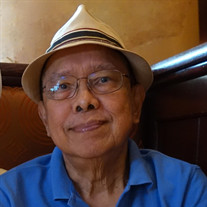 Dr. Martin Paguyo Canero, Jr, 80, died Thursday, September 13, 2018 at Rush University Medical Center, Chicago, IL. A Funeral Mass will be held on Saturday, September 29 at 10 am at St. Mary’s Catholic Church in Buffalo Grove, IL, followed by interment at All Saints Catholic Cemetery and Mausoleum in Des Plaines, IL. Dr. Canero was born on July 13, 1938 in Isabela, Philippines, to the late Martin and Jovita Canero, the second youngest of five siblings, Benjamin, Consuelo, Perla, Mario, and Norma of the Philippines. He earned a medical degree from the University of Santo Tomas in 1964. After completing residency in Obstetrics and Gynecology in the United States, he practiced in Welch, WV for several years. In the summer of 1977 he entered solo practice in Abbeville, SC and generously gave of his time and love to his patients, office staff, and the entire hospital staff for 27 years. He retired in 2004 and lived outside Atlanta, GA with his wife. Martin is survived by his loving wife of 52 years, Henedina Racho Canero, son Sam Canero with his wife Emma of Chicago, son Tom Canero of Shoreview, MN, daughter Marlyn Ciesla with her husband Jim of Napervile, IL, five grandchildren, and many nieces and nephews. He is preceded in death by his son Joe Canero, his siblings, and parents. In lieu of flowers, memorials may be made to Alzheimer’s Association at alz.org or to the charity of one’s choice.

The family of Martin Paguyo Canero, Jr. created this Life Tributes page to make it easy to share your memories.

Send flowers to the Canero family.