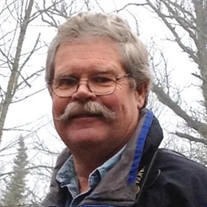 SERVICE ANNOUNCEMENT -- Dr. Mark R. Sanborn passed away on June 19, 2020. A memorial service celebrating his life will be held on Saturday, June 19, 2021 at 10:30am at First Presbyterian Church of Lake Forest, 700 North Sheridan Road, Lake Forest, Illinois. The service will also be live streamed and can be found at www.firstchurchlf.org/videos. In lieu of flowers, memorial contributions may be made in his name to Iowa State University Foundation, 2505 University Boulevard, Ames, Iowa 50010 or www.foundation.iastate.edu to support Microbiology Scholarships. Dr. Mark R. Sanborn, age 74, a resident of Green Oaks, IL passed away on June 19th, 2020 while in the care of JourneyCare Hospice after a much too brief battle with Bile Duct cancer. Mark was a professor, scientist, and an athlete; but most of all, he was a devoted father to his three sons. Born March 17th, 1946 to Helen C. (nee Shulz) Bebb and Robert E. Sanborn in Mason City, IA, he grew up Cedar Falls, IA playing in creeks and causing mischief with his younger brother, Dennis. He attended the University of Northern Iowa (UNI) where he studied Biology and also ran high hurdles in track, graduating with a Bachelor of Arts in 1968. He was drafted into the United States Army, ultimately being stationed in Alaska, “fighting snowflakes” as he liked to say. After his honorable discharge in 1970, Mark returned to UNI to complete his Master’s degree and then received his Ph.D. in Microbiology from Iowa State University in 1976. He went on to teach Virology and Microbiology at Oklahoma State University in Stillwater, OK from 1976 to 1990, achieving full tenure. He was considered by former students to be a tough but fair professor. When asked why he wore his watch on the inside of his wrist, he would explain that it allowed him to check the time during his lectures without letting his students know that class was almost over. “They are mine for one hour, not 58 minutes,” he would say. In 1990, he relocated to the Chicagoland area to marry Susan, whom would remain his wife and best friend until his passing at 30 years of marriage. Mark joined Abbott Labs, where he rose to the level of Director of Scientific Affairs for Abbott Molecular. Through his career at Abbott, he and his teams helped develop diagnostic tests which helped protect the nation’s blood supply from hepatitis and HIV. Throughout his life, Mark was an avid athlete. He was an active marathon runner and triathlete with a sub-3-hour marathon time and countless races under his belt. His athleticism was passed on to his eldest son, Hayes. Mark was able to attend Hayes’ three Ironman races and they were among his proudest moments. Mark had a lifelong passion for education. He often told his sons that they could attend any college or university that they could get into, but their tuition was going to go to Iowa State. He finally got this wish when his youngest son, Jay, attended and graduated from Iowa State University where he studied computer engineering. Mark always enjoyed Jay’s help when challenged with his computer and cell phone “issues”. His middle son, Stet, inherited Mark’s love of science and teaching. Stet would go on to become an adjunct lecturer at UC-Berkeley, getting teaching advice and “strategies to keep them awake” from his father. Mark was an active member of the Lake Forest First Presbyterian Church, serving as a liturgist and helping his wife behind the scenes with the legendary rummage sale. His passion for charitable work extended to his volunteer role at the Clara Abbott Foundation during retirement, supporting families in need. He was also “King” of the cul-de sac, enjoying the company of the neighbors with their many get-togethers and holiday parties. Mark’s favorite place in the world was at their lake log-cabin in the “far Northwoods” of Minnesota. Mark and his sons would tap the maple trees and produce their “world-famous” Three-Pines maple syrup. The family enjoyed driving the boat around the lake, joining together in their annual toasts to family, and listening to him cheer, with colorful language, his favorite team, the Chicago Bears. Mark is survived by his wife, Susan (nee Woroch) Sanborn, his three sons, Hayes Sanborn, Stet (Steven Korovesis) Sanborn and Jay Sanborn, his brother, Dennis (Jo) Sanborn and nephews, Nicolas Sanborn and Andrew (Christina) Sanborn. Mark was an expert in viruses and passionate about science-based policy, therefore, a memorial service will be delayed until June 2021 when all of Mark’s friends and family can safely join together at the First Presbyterian Church in Lake Forest to celebrate his life, without risk to themselves or the community that he loved. In-lieu of flowers, memorial contributions may be made in his name to Iowa State University Foundation, 2505 University Boulevard, Ames, IA 50010 or https://www.foundation.iastate.edu to support Microbiology Scholarships. For information – Reuland & Turnbough Funeral Directors of Lake Forest, 847-234-9649 or www.RTfunerals.com.

The family of Dr. Mark R. Sanborn created this Life Tributes page to make it easy to share your memories.