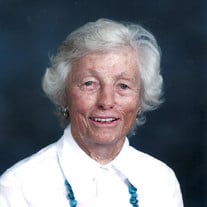 Margaret Stuart Hart, 97 of Lake Forest, IL died peacefully January 27th at her home. Born in Chicago, Illinois January 3, 1922, the daughter of R. Douglas and Harriet McClure Stuart, she spent her early years in Lake Forest and attended the Bell School there before attending Miss. Hall’s School in Pittsfield, Mass. After high school, she returned to Lake Forest and graduated from The University of Chicago in 1944. Margaret married Augustin S. Hart, Jr. April 11, 1942 in Lake Forest whom she had met several years earlier at Princeton University where he was friends with Margaret’s brother, Robert D. Stuart, Jr. She and Gus spent the early portion of their marriage on military bases in Louisiana and Georgia where he trained as an officer in the 82nd Airborne. When Gus was sent overseas with his division in 1942, Margaret returned to Lake Forest and completed her college degree. After World War II, they moved to Long Island, New York where their 5 children were born. The family moved to Lake Forest in 1960 and has lived there ever since. Margaret was always active, athletically and otherwise, enjoying tennis, ice skating, skiing, golf and horseback riding. She golfed and rode horses until she was 94. She loved the outdoors, especially the Wyoming Rockies to which she travelled from age 6 to 96 to visit her family’s ranch. In her teenage years, she hunted big game, fly fished, hiked and rode extensively. She was happiest when riding her horse and exploring in the Clarks Fork Valley of Wyoming. The grand-daughter of a Presbyterian minister, Margaret was active in The First Presbyterian Church of Lake Forest, and served for many years as trustee and Board Chair of McCormick Theological Seminary where her grandfather had been it’s first president. She was a life trustee of Lake Forest College and Lake Forest Open Lands. She was active in many civic and charitable organizations serving on several boards including the School Board, WTTW, The National Parks Conservation Association, Cotton Bay Foundation in Eleuthera, Bahamas and the Department of Defense Advisory Committee on Women in the Armed Services in the 1980’s. Margaret greatly enjoyed traveling and did so throughout the world in part through her husband Gus’s leadership of the International Division of Quaker Oats. She constantly pushed herself to learn more and read more, and never shied away from discussions about politics or world affairs. Margaret enjoyed entertaining and being entertained. It didn’t matter if it was around a campfire, a square dance or a sundowner on the African plains. She truly liked people and was interested in what they thought and did. She had a wonderful sense of humor and fun. She loved making up plays and skits with her grandchildren and having costume parties. She was a lifelong artist and drew her own Christmas cards starting at age 12. She was also active in Republican politics serving in many volunteer efforts and positions while strongly supporting local, regional, state and federal candidates throughout her life. She had strong views about what was right and wrong, but was always willing to listen to those who opposed her viewpoint and was never afraid to question those of her own party with whom she might disagree. She was preceded in death by her husband in 1999; her sisters Anne Stuart Batchelder and Harriet Stuart Spencer; her brother Robert D. Stuart, Jr.; and two sons, Douglas Stuart Hart of Powell, WY and Robert Dixon Hart of Red Lodge, MT. She is survived by her daughters, Kathryn Hart (Robert) Lansing of Lake Forest, IL and Heather Hart (Walter) Goldstein of Bozeman, MT; her son Augustin S. (Becky) Hart III of Oquawka, IL; her daughters-in-law Harriet Corbett of Powell, WY and Trenay Hart of Billings, MT; her grandchildren, Stuart (Farley) Lansing of Lake Forest, Sage Lansing (Austin) DePree of Jackson, WY, Gerrit (Christyn) Lansing of Washington, D.C., Philip Hart of Brazil and WY, Austin Hart of Red Lodge, MT, Abra Gasser of Long Beach, CA, and Brandon, Nathanial, and Margot Goldstein of Denver, CO. Also surviving is her sister-in law, Lillan Stuart of Oslo, Norway; seven energetic great-grandchildren and many nieces and nephews. A memorial service will be held on Friday, May 17th at 2pm at the First Presbyterian Church in Lake Forest, IL. In lieu of flowers, memorials may be left to, Lake Forest Open Lands, First Presbyterian Church of Lake Forest and The National Parks Conservation Association.

The family of Margaret Stuart Hart created this Life Tributes page to make it easy to share your memories.

Send flowers to the Hart family.