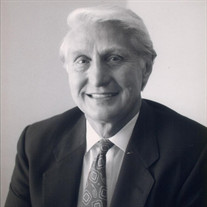 Dr. Lionel "Bill" Ganshirt, age 88, a longtime Lake Forest resident, passed away Friday, July 31, 2020. Lionel William “Bill” Ganshirt was born on November 1, 1931 in Monroe, Wisconsin. The family owned a 250-acre farm in northwestern Illinois. He was the youngest of three boys. He attended a one-room school house for grades 1-8 with one teacher for all the students. The farm was lost in 1938 during the Great Depression and the family moved to Freeport, Illinois. He completed Catholic grade school and high school at Aquin. He received a scholastic and athletic scholarship to Loras College and completed his studies in three years, graduating Summa Cum Laude. During his college years he was a varsity athlete in baseball, basketball and tennis. He received an invite to play Major League Baseball but turned it down to attend medical school at Loyola Stritch School of Medicine, where he graduated from Cum Laude. On May 5, 1956, he married his sweetheart, Mary Lou Pierce. He began his residency in general surgery at Cook County Hospital and was drafted into the Air Force during his second year. He was sent to a SAC Air Force Hospital in Madrid, Spain. It was there that he was introduced to his second love, golf. After two years in Spain he returned to complete his residency and then a fellowship in vascular surgery at Hines, VA Hospital. Upon graduation he joined the Surgeons Group at Lake Forest Hospital becoming the first vascular surgeon in Lake County. He continued to teach at Loyola and the VA for the next 10 years. During his tenure at Lake Forest Hospital, he served as President of the Medical Staff, Chairman of the Department of Surgery, and President of the Lake County Medical Society. An avid golfer, he was a member at Shoreacres country club for over 50 years. He first shot his age when he was 70; he shot 69. He was active at St. Mary Church and volunteered for many groups in Lake Forest. He is preceded in death by his wife Mary Lou Ganshirt. He is survived by his children, Catherine Morlock (Paul), Stephen Ganshirt (Linda) and Jennifer Foley (Mike), and grandchildren Maggie Burros (Morlock), Michael and James Morlock, Lauren Lantero (Ganshirt), Ryan and Graham Ganshirt, Jack and Ella Foley. A private family service will be held due to the Covid pandemic. In lieu of flowers, donations may be made to Northwestern Memorial Foundation, 541 North Fairbanks Court, Chicago, Illinois 60611. Please include “Dr. Lionel Ganshirt” in the memo line. Donations can also be made online at giving.nm.org/lfh. Your gift will support patient care at Northwestern Lake Forest Hospital.

The family of Dr. Lionel "Bill" Ganshirt created this Life Tributes page to make it easy to share your memories.