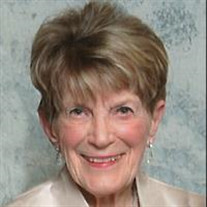 Liane Marie Ledvina was born October 6, 1 933 to William and Evangeline (nee Bouda) Ledvina in Manitowoc County, Wisconsin. She graduated from Lincoln High School in 1951 and received her Bachelor of Science degree in Medical Technology in 1955 from the University of Wisconsin, Madison. She was employed by Highland Park Hospital, in Highland Park, Illinois, as Assistant Chief Medical Technologist, laboratory Supervisor of Chemistry from 1955 through 1992. In 1971 she married Richard E. Klingler and they made their home in Lake Forest, Illinois. Liane attended the Church of St. Mary in Lake Forest being active in the Guild of St. Mary. She received the honor of being voted Woman of the Year in 2010 and received the Christofidelas award from the Archdiocese of Chicago in 2012. She was active with the Women’s Board of Catholic Charities, Lake County Services, and was awarded the Irene Leahey McMahon service award in 2011. Surviving Liane are her nephews Jeffrey and Charles Ledvina, Jeffrey and John Brian Klingler, and her sister-in-law Donna Ledvina. She was preceded in death by her husband Richard E. Klingler (2012), her parents, and her brother Lloyd Ledvina. In lieu of flowers contributions in Liane’s name may be made to either NMLFH Parkinson’s Program at Northwestern Memorial Foundation, PO Box 734985, Chicago, IL 60673 (giving.nm.org/lfg) or Catholic Charities of Lake County at 671 S. Lewis Ave., Waukegan, IL 60085. No Visitation. Funeral Mass will be held on Monday, September 20, 2021 at 11am at the Church of St. Mary, 175 E. Illinois Rd., Lake Forest, IL 60045. Interment will immediately follow at St. Mary Cemetery, Lake Forest, IL. The church service will be live-streamed at https://www.facebook.com/ChurchofStMaryLF/videos/ Info. Reuland & Turnbough Funeral Directors of Lake Forest, www.RTfunerals.com or (847) 234-9649.

Liane Marie Ledvina was born October 6, 1 933 to William and Evangeline (nee Bouda) Ledvina in Manitowoc County, Wisconsin. She graduated from Lincoln High School in 1951 and received her Bachelor of Science degree in Medical Technology in 1955... View Obituary & Service Information

The family of Liane L. Klingler created this Life Tributes page to make it easy to share your memories.

Send flowers to the Klingler family.