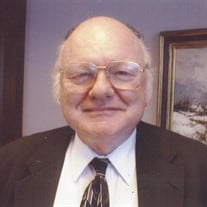 Lewis Tilden Steadman, Sr., age 90, passed away peacefully at home in Lake Bluff, Illinois on March 26, 2017. He was surrounded by his loving children Carol, Lewis Jr. and his wife Holly, and Robert, and his adored grandchildren Scott (Katie) and Ben. Lew was eagerly anticipating the arrival of his first great-grandchild Liam Cunningham Steadman on April 13, 2017. He is also survived by his brothers Robert and Richard and his sister Calista and many nieces, nephews, grandnieces and grandnephews. His brother James predeceased him. Lewis was the beloved husband for 64 years of the late Alma Bailey Steadman. He was born in Chicago and grew up in Marcellus, NY where he met Alma at Marcellus High School. After Lew survived a bout with polio, he and Alma were married upon graduation from Syracuse University in 1946. Lew worked as an Engineer at Ford Motor Company in Detroit and then received his J. D. Degree from George Washington University while working full time at the U.S. Patent Office. He then joined the intellectual property firm of Charles W. Hill (later Hill, Steadman & Simpson), becoming a Managing Partner. Lew worked for more than 50 years as a renowned patent expert, winning major litigation for his long-time clients in the U.S., Australia and Japan. Most recently he was of counsel at Rockey, Depke, Lyons & Kitzinger. Lew and Alma moved to Lake Bluff in 1953 where he served as Village Board President from 1971-79 and was a Board Member of the Zoning Board and the Armour Woods Association. Lew was a long-time member of the Union League and Metropolitan Clubs in Chicago and the Knollwood Club in Lake Forest. Lew and Alma loved to travel, taking their first “around the world” trip in the summer of 1962. They delighted in spending time with family in Hilton Head, S.C. and Puerto Rico. They also had a lifelong passion for collecting American antiques. Then in 1996, Lew purchased the house at 18 North Street in Marcellus, NY, where he had grown up and married Alma, as a 50th wedding anniversary present. Together they restored the house, originally built in 1836, and in 2006 they donated it to the Marcellus Historical Society for use as a museum. Lew’s dry wit, his intellectual curiosity and his generosity in sharing his knowledge with those around him leaves a huge hole in our lives. Lew was devoted to his family and loved history, golf, sports cars, bourbon old-fashioneds, and traveling the world. He will be very much missed by all who knew him. The family also wishes to extend their profound gratitude to his devoted caregivers Pelagio Cantillas and Orlando Castillo. The family service was private. Contributions in Lew’s memory may be sent to the Marcellus Historical Society, P.O. Box 165, Marcellus, NY 13108. Info - Reuland & Turnbough Funeral Directors of Lake Forest, (847) 234-9649 or RTFunerals.com.

Lewis Tilden Steadman, Sr., age 90, passed away peacefully at home in Lake Bluff, Illinois on March 26, 2017. He was surrounded by his loving children Carol, Lewis Jr. and his wife Holly, and Robert, and his adored grandchildren Scott (Katie)... View Obituary & Service Information

The family of Lewis Tilden Steadman, Sr. created this Life Tributes page to make it easy to share your memories.