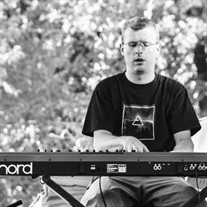 Justin Allan Molsbee passed away suddenly on January 4, 2017 in Chicago. Born October 29, 1978 in Denton, Texas, Justin graduated from Lake Forest High School and attended Roosevelt University in Chicago. Justin earned many honors in high school and later in college. He was a gifted musician and played piano, drums, organ, guitar, bass, and several wind instruments. He was a member of several Jazz bands and shared his musical talent through teaching piano and guitar in Chicago and the North Shore. Known to friends and fellow musicians as "The Piano Man", his life brought joy and rhythm to countless students, family and friends. He is survived by Jay Obermark; his parents, Dow and Allan Molsbee formerly of Lake Forest; a sister, Brooke Weatherford of Denton, Texas and a brother, Staley Molsbee of Dallas, Texas, along with his many friends in the Chicago area. He is also survived by Elke and Hank, his beloved dogs he so enjoyed walking along the north shore. A memorial service is planned for Saturday, January 14th at 1:00PM at the Union Church of Lake Bluff, 525 E. Prospect Avenue, Lake Bluff, Illinois. For information – Reuland & Turnbough Funeral Directors of Lake Forest, 847-234-9649 or RTfunerals.com. His ashes will be scattered along the shores of Lake Michigan where he walked with his beloved dogs. A private ceremony will also be held where he will be interred in the Molsbee Family cemetery in Nocona, Texas. In lieu of flowers, donations may be made in Justin's name to the African Wildlife Foundation. This Foundation is one that Justin avidly supported and where he often volunteered.

The family of Justin Allan Molsbee created this Life Tributes page to make it easy to share your memories.

Send flowers to the Molsbee family.