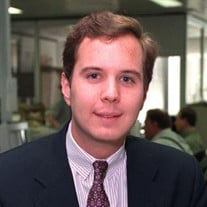 At the highest levels of Illinois Republican politics, John McGovern knew how to win. “He was brilliant . . . Everything I built politically I built on a foundation he laid,” said former Illinois Sen. Mark Kirk, for whom McGovern served as congressional campaign manager — and as the best man at Kirk’s wedding. “When John McGovern said someone was good, that was the stamp of approval you needed to win,” Kirk said. A highly regarded political strategist for the better part of three decades, McGovern died unexpectedly Friday at his Lake Forest home of a suspected heart condition, friends said. He was 48. McGovern worked as Illinois press secretary for then-House Speaker J. Dennis Hastert in the 1990s after serving as communications director for Peter Fitzgerald, the first GOP senator from Illinois in 14 years. Kirk said he was shocked to get the news of McGovern’s death from former Rep. Bob Dold, another official McGovern spoke for during his career. Kirk called McGovern’s death a “tragedy” not only because McGovern understood Republican politics in the state so well, but because of the two young boys, ages 2 and 4, he leaves behind. Longtime friend and colleague Brad Hahn called him the “gold standard on the Republican side” in terms of his ability to craft messages, speeches and strategy that not only appealed to Republicans but also broader audiences. But he wasn’t just good at his job. Hahn said McGovern “was always an amazing friend” and a “great person.” “He had an amazing wit, sharpness and humor that is unmatched by anyone I’ve ever worked with, and beyond that he was a great friend, colleague and mentor,” Hahn said. “In politics and government there’s a lot of fakeness, but John was genuine and always there as a friend.” Hahn said some of their best days were spent at Wrigley Field — McGovern was an avid Cubs fan — and they would sit and talk for hours. Admiration also came from across the aisle. Democratic strategist Kitty Kurth, now president of political consulting firm Kurth Lampe, said McGovern was “always professional.” “We would disagree on candidates and issues, but he was never disagreeable,” Kurth said. “He was an honorable man in politics, which, in this day and age, is hard to come by.” McGovern’s cousin, Luke Lincoln, said the two were friends who grew up together in Lake Forest and attended the same schools since they were only a few years apart. McGovern enjoyed fishing, hunting and golfing in his spare time. Chicago — and his beloved Cubs and Blackhawks — “had a special place in his heart,” Lincoln said. “He was a great family man,” Lincoln said. “He was kind of old-school in that he liked tradition and history. He was the historian of our family.” McGovern earned a bachelor’s degree in history and American studies from Princeton and then went on to receive a law degree from Northwestern University’s Pritzker School of Law. Besides Kirk, Fitzgerald and Hastert, McGovern also served as spokesman for former Illinois Treasurer Judy Baar Topinka, as well as the Illinois Republican Party. Beyond politics, McGovern served as president of the auxiliary board of The Art Institute of Chicago, and on the board of directors for the Boys & Girls Clubs of Chicago and the Elawa Farm Foundation. Last year, he joined the Thurston Group to manage several of the firm’s strategic priorities, and before that McGovern worked with Resolute Consulting, focusing on health care industry clients. McGovern is survived by his wife Wentworth, two young sons, his mother Karen McGovern and his sister Courtney McGovern. Services are scheduled for 4:30 p.m. July 18 at the Church of the Holy Spirit, 400 E. Westminster Ave., in Lake Forest. His family has asked that donations in memoriam be made to Deerfield Academy in Massachusetts, P.O. Box 306, Deerfield, MA 01342; The Art Institute of Chicago, 111 South Michigan Avenue, Chicago, Illinois 60603-6404 or Elawa Farm, 1401 Middlefork Drive, Lake Forest, IL 60045.

At the highest levels of Illinois Republican politics, John McGovern knew how to win. &#8220;He was brilliant . . . Everything I built politically I built on a foundation he laid,&#8221; said former Illinois Sen. Mark Kirk, for whom McGovern... View Obituary & Service Information

The family of John Edward McGovern III created this Life Tributes page to make it easy to share your memories.

At the highest levels of Illinois Republican politics, John McGovern...

Send flowers to the McGovern family.