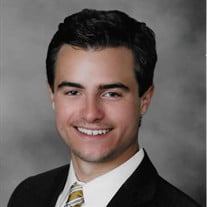 John “Jack” Ireland Adams, 20, of Lake Forest, IL passed away at Clear Lake, Indiana on June 29, 2019 while wake surfing, one of his favorite activities. Jack was born in 1998 in Indianapolis and is preceded in death by his grandparents, Robert H. Adams and Joan I. Adams, and his aunt Debra Adams. He is survived by his parents, Richard and Kristine, brother Connor and sister Lindsay, grandparents Gary and Suzi Hewitt, aunt Kelly McCabe (Paul), uncle Robert Adams (Nancy), cousins John and Kate McCabe, Courtney, Kelsey and Mackenzie Adams. After graduating from Lake Forest High School, Jack attended The College of Charleston where he pledged the Pi Kappa Alpha fraternity. He cherished his short time with his “brothers”. Jack was passionate about Lacrosse and loved every aspect of the game, particularly the camaraderie he enjoyed with his teammates and coaches. He was named to the Illinois All State Team in 2017. “Sweet Jack” had an infectious smile, was quick to make friends and was a leader on the field as a coach for The Lake Forest Lacrosse Association. He was fascinated and curious about many things including history, music, fishing, wake surfing, snow skiing, cooking and sewing. Above all, Jack most enjoyed spending time with those he loved and adored at his favorite place, Clear Lake. A Memorial Service will be held on Thursday, July 11, 2019 at 11:00 am at The Church of the Holy Spirit, 400 East Westminster Avenue, Lake Forest, IL. Inurnment private. Info - Reuland & Turnbough Funeral Directors of Lake Forest, 847-234-9649 or www.RTfunerals.com. To honor Jack’s memory and in lieu of flowers, donations may be made to Lake Forest Lacrosse Association: by Chase QuickPay or Zelle (made to [email protected]) or by mail to: Attn: Jason Van Camp 1961 W. Salisbury Lane Lake Forest, IL 60045

John &#8220;Jack&#8221; Ireland Adams, 20, of Lake Forest, IL passed away at Clear Lake, Indiana on June 29, 2019 while wake surfing, one of his favorite activities. Jack was born in 1998 in Indianapolis and is preceded in death by his grandparents,... View Obituary & Service Information

The family of John "Jack" Ireland Adams created this Life Tributes page to make it easy to share your memories.

Send flowers to the Adams family.