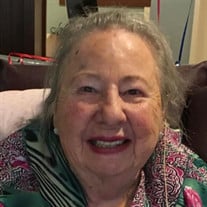 Joan Russell Sparrow, of Lake Forest, age 92, much beloved wife of Vincent P. Sparrow; loving and loved mother of Vincent R. (Peggy), Peter R. (Charlotte), Jennifer (Richard) Snorf, Geoffrey G. (Tracey) and Megan Jordan; and adored and adoring grandmother to Allison and Peter Sparrow, Stephanie and Emily Kate Sparrow, A.J. and Gary Snorf, Abigail, Benjamin and Charles (Mara) Sparrow and Calla and Gwen Jordan. She is predeceased by her late husband Vincent P. Sparrow, her son Peter and son in law Richard, her parents Robert and Helen (Rumely) Russell, her sisters Virginia (Alfred) Reichmann, Margaret (John) Miller, Barbara Beilby and by her brother Cornelius (Phyllis) Russell. Born in Trenton, New Jersey, she graduated from LaPorte High School, LaPorte, Indiana and attended Mundelein College, now part of Loyola University Chicago. Joan met Vince during his tenure with Deloitte, during a year that he spent in the Firm's Chicago office. After their first meeting, he told his roommate he had met the woman he was going to marry. They were married on April 30, 1955 at Holy Name Cathedral in Chicago four months after their first date. They were married for more than 52 years before Vince’s death in 2007. After the wedding they returned to London, where Vince had lived before his year in Chicago, and then returned to Chicago in 1957 where he joined Peat, Marwick, Mitchell & Co. (now known as KPMG LLP.) They lived initially in Evanston and then moved first to Libertyville and finally Lake Forest. Joan, in addition to raising five children was active in various school related activities, Brownies and Girl Scouts and then at Church of St Mary in Lake Forest, where she served for several years as a lay minister for the sick. She was also involved in the Mother’s Club at Woodlands Academy of the Sacred Heart, the local Questors Club, book and bridge clubs and the local garden club. She was a gardener and a very accomplished flower arranger. Joan’s favorite role was as grandmother (Grammie or Nana) to her eleven grandchildren. She also loved being the matriarch of the large Rumely family and kept in regular touch with her much loved nephews, nieces, cousins as well as countless friends on at least four continents. She was a very warm and gracious person and readily “adopted” many who were in her orbit. This included several of the wonderful caring, loving and genuine staff at Libertyville Manor, where Joan moved after suffering first a hip break and then fractured legs. There will be a private funeral for Joan on Monday, December 28th at 9:30 a.m. at the Church of St Mary in Lake Forest. The funeral will be live streamed and can be found at the Church’s Facebook page at https://www.facebook.com/ChurchofStMaryLF/. Info - Reuland & Turnbough Funeral Directors of Lake Forest, 847-234-9649 or www.RTfunerals.com. The family intends to conduct a memorial celebration and party (Joan would have insisted) later in 2021 when conditions allow. In lieu of flowers donations can be made to Next Door Milwaukee Foundation, 2545 N 29th St., Milwaukee, WI 53219 or Kindergarten Countdown Camp United Way Lake County 330 South Greenleaf St., Gurnee, IL 60031.

The family of Joan Russell Sparrow created this Life Tributes page to make it easy to share your memories.