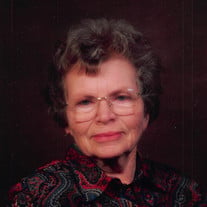 Joan Veronica Carr Dickie, a resident of Lindenhurst, Illinois died Saturday, March 12th, 2016, of lung disease at the home of her daughter. Born in Chicago in 1918, Joan was always excited about learning and attended Clarke College in Dubuque, IA where she graduated with highest honors. Joan worked in the Navy shipyards of Alabama and for Time magazine before marrying “Mike” Dickie. Joan and Mike had 3 daughters, Ginni Engelbrecht (Rich), Jean Suter (Samuel), and Donna, who died in infancy. In the late 50’s and 60’s, Joan juggled teaching 4th graders while being a homemaker. After her daughters married, Joan and Mike moved to Green Bay, WI to be close to their daughter Ginni and her husband Rich. Over the years they became proud grandparents of 4. and after Mike’s death, a great-grandmother of 2. When the computer age dawned, this lady who, as a kid, had chased a horse-drawn ice wagon to get slivers of ice, learned how to email and play free cell. In 2012, Joan moved to a Senior Community in Lindenhurst near daughter Jean and enjoyed baking cookies for fellow residents, started a Scrabble night and loved wi bowling. She also crocheted mats for the homeless using 3,000 recycled plastic bags for each mat. Joan is survived by her sister Jinny (Dick) and her brother Ron and brother-in-law Martin and their families. No visitation. A funeral mass will be held 11:30 a.m. Thursday, April 7th at Church of St. Mary, 175 E. Illinois Road, Lake Forest, Illinois. Interment will be private. For more information: REULAND & TURNBOUGH, www.RTfunerals.com or 847-234-9649 In lieu of flowers, please do an act of kindness for an elderly person in her honor. Donations can also be given to JourneyCare Hospice. The family wishes to thank them for their incredible support and patience.

Joan Veronica Carr Dickie, a resident of Lindenhurst, Illinois died Saturday, March 12th, 2016, of lung disease at the home of her daughter. Born in Chicago in 1918, Joan was always excited about learning and attended Clarke College in Dubuque,... View Obituary & Service Information

The family of Joan Veronica Dickie created this Life Tributes page to make it easy to share your memories.

Send flowers to the Dickie family.