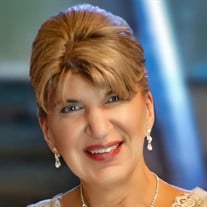 Janet Burke MacNaughton, 63, passed away at her home in Chicago after a longtime illness. Janet was born in Davenport, Iowa, the daughter of Stephen and Millie Burke. She was a graduate of Davenport Central High School and the University of Iowa. She worked as a systems analyst for the University of Iowa Hospitals; then, as a project manager for Allstate Insurance, Northbrook; and as a fundraiser for the Archdiocese of Chicago. She was also a volunteer for numerous activities for her children’s schools in Lake Forest, as well as PAWS Animal Rescue and the Salvation Army. Janet was a longtime resident of Lake Forest, IL, a member of St. Mary’s Church, and an active member of the Women’s Guild of St. Mary. My mom was a beautiful, intelligent, caring, funny, high-achieving, gentle, helpful, giving, kind, and adored woman She loved her family and friends, traveling, movies and musicals, and interior decorating. Janet enjoyed cooking and baking for her large extended family, especially during birthdays and holidays. She was the best bargain shopper around, loved anything Princess Diana, and had a beautiful singing voice. She supported her children in absolutely everything they did and beamed with pride talking about them. Her grandson Everett brought her immense joy, and she loved bringing a surprise bag of goodies for him to open on her visits. Although deeply missed, her family is comforted knowing that she is now home with Our Lord and surrounded by peace, love, and light. Janet was preceded in death by her parents and several cousins. She is survived by her son, Michael MacNaughton, Chicago; daughter, Laura Oathout (Jess), Nolensville, TN; sister, Diana Cain (Robert), Murphy, TX; brother Stephen M. Burke, Indianapolis; sister-in-law Cathy Williams (Matt), Lake Forest, IL; grandsons Everett and Finn Oathout; numerous friends, some of whom were lifelong; and relatives among the Burke, Carlin, MacNaughton, Williams, and Oathout families, all of whom will miss her very much. Visitation 5:00 to 7:00 p.m. Friday, April 1, 2022 at the Parish House at St. Mary’s Green, 178 E. Illinois Road, Lake Forest (across the street from the church). Funeral Mass 10:00 a.m. Saturday, April 2, 2022 at Church of St. Mary, 175 E. Illinois Road, Lake Forest. Interment at Lake Forest Cemetery. The Funeral Mass will be live-streamed for those unable to attend in-person at: https://www.facebook.com/ChurchofStMaryLF/videos/ Donations in Janet’s name may be made to PAWS Chicago www.pawschicago.org Arrangements by Reuland & Turnbough Funeral Directors of Lake Forest www.RTfunerals.com or (847) 234-9649.

Janet Burke MacNaughton, 63, passed away at her home in Chicago after a longtime illness. Janet was born in Davenport, Iowa, the daughter of Stephen and Millie Burke. She was a graduate of Davenport Central High School and the University of... View Obituary & Service Information

The family of Janet Kay MacNaughton created this Life Tributes page to make it easy to share your memories.

Janet Burke MacNaughton, 63, passed away at her home in Chicago...

Send flowers to the MacNaughton family.