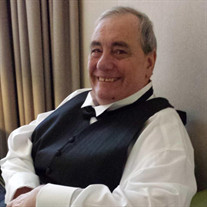 James C. Wenzel, 73, of Lake Bluff, passed away peacefully on September 19th after a long illness. Jim was born in Evanston and grew up in Wilmette, he was the second of two children. Jim graduated from New Trier High School and attended Northwood Institute in Midland Michigan. In 1969, he was drafted into the U.S. Marines where he received two medals of commendation for his service. He met his wife Pam in 1970 and they were married a year later in September and had a wonderful 50 years together, their 49th wedding anniversary is September 25, 2020. Jim was a hard worker and succeeded in all of his business adventures. In his younger years he loved to run in 5K races and loved to work out at The Multiplex in Deerfield, where he met and made some long-lasting friends. Jim loved watching Notre Dame football, the Bears, Blackhawks, Cubs and the Bulls, and more recently Clemson football. Jim was a very good athlete and his passion was 16-inch softball as well as playing football and basketball in his grade school days. As an adult he played in many 16-inch leagues in Wilmette, Glenview and in Chicago. Jim was also a Coach for Pee Wee Hockey in Lake Forest. He loved to watch movies surrounded by his family and the dogs. Another hobby of his was taking care of his yard, he prided himself with making it look professional and then passed the torch to his son Matt. Jim adored his wife Pam, and to his two children, Matthew and Margaret, and his granddaughter Elizabeth Grace. Nothing made him prouder than his children, he would stop at nothing to make sure they had everything they needed or wanted. He was preceded in death by his parents Carl and Margaret (Marge) Wenzel of Wilmette. He leaves behind his sister Nancy Tetzlaff of Evanston, many nieces and nephews, as well as great nieces and great nephews. The visitation will be held at the Gorton Community Center in Lake Forest on Saturday, September 26, 2020 from 9 a.m.to 11 a.m. followed by a private Mass which can be viewed by live stream https://www.facebook.com/ChurchofStMaryLF/videos/. In lieu of flowers, memorial contributions may be made to The Cradle at www.cradle.org/donate. For more information, please contact Reuland & Turnbough Funeral Directors of Lake Forest, 847-234-9649 or www.RTfunerals.com.

James C. Wenzel, 73, of Lake Bluff, passed away peacefully on September 19th after a long illness. Jim was born in Evanston and grew up in Wilmette, he was the second of two children. Jim graduated from New Trier High School and attended Northwood... View Obituary & Service Information

The family of James C. Wenzel created this Life Tributes page to make it easy to share your memories.

James C. Wenzel, 73, of Lake Bluff, passed away peacefully on...

Send flowers to the Wenzel family.