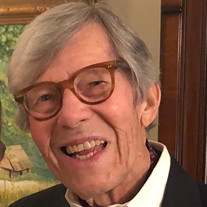 Jack Allen Roderick, 91, passed away in his sleep at his home in Lake Forest Place, Lake Forest, IL on November 22, 2019. He was born February 20, 1928 in Danville, IL to the late Ralph Allen Roderick and Ruth Agnes Hartley Roderick. At the age of six, his family moved to Lafayette, IN, where he graduated from Lafayette Jefferson High School where he first realized his artistic talent. Jack was almost 18 when he enlisted in the Navy in January, 1946. After boot camp at Camp Peary, VA he was assigned to the USS Amphion which was an auxiliary repair ship docked in Norfolk, VA. Jack was a Seaman 1st Class, Yeoman, but once they heard he was an artist, he was immediately assigned to work on the startup of a ship newspaper and in the library. He became the Chaplain’s Assistant. He also had special sea detail assignments, such as working the phones on the bridge. He was only in the Navy for 22 months before being invited to join an expedition to the South Pole. Instead, he enrolled at the John Herron Art Institute in Indianapolis to study fine art. He later transferred to the American Academy of Art in Chicago to study commercial art. He met his wife Laurabelle Eby on a blind date and they were married a year later on May 20, 1951. They moved to Lake Bluff, IL where Jack became an illustrator for Encyclopedia Britannica Films, and also worked at a publishing house and an advertising agency. He then joined Upjohn International in Kalamazoo, MI as an advertising art director. He retired from Upjohn in 1990. In retirement, Jack and Laurabelle enjoyed traveling and spending time with their grandsons. Jack also had an art studio in downtown Kalamazoo where he painted for his family. Jack is survived by his wife Laurabelle, daughter Tura Roderick Cottingham (John Cottingham) of Evanston, IL, and two grandsons Max Cottingham of Denver, CO and Clayton Cottingham of Providence, RI. A memorial service will be held at Lake Forest Place on Saturday, December 21 at 11 a.m. In lieu of flowers, memorial contributions may be made in Jack’s name to the First United Methodist Church of Kalamazoo or The Geneva Foundation of Presbyterian Homes. First United Methodist Church of Kalamazoo 212 South Park Street Kalamazoo, MI 49008 The Geneva Foundation of Presbyterian Homes 8707 Skokie Boulevard Suite 400 Skokie, IL 60077

Jack Allen Roderick, 91, passed away in his sleep at his home in Lake Forest Place, Lake Forest, IL on November 22, 2019. He was born February 20, 1928 in Danville, IL to the late Ralph Allen Roderick and Ruth Agnes Hartley Roderick. At the... View Obituary & Service Information

The family of Jack Allen Roderick created this Life Tributes page to make it easy to share your memories.

Jack Allen Roderick, 91, passed away in his sleep at his home...

Send flowers to the Roderick family.