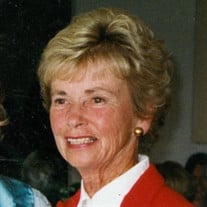 Hollis "Hobby" McLaughlin Shank died peacefully at Balmoral Care Center at Lake Forest Place, Lake Forest, Illinois on November 27, 2021. Hobby was born on March 10, 1928, in Lake Forest to George F. McLaughlin and Hollis (Letts) McLaughlin Whipple. Hobby, who chose her own nickname at a young age to differentiate herself from her mother, was known for being an outspoken woman with a great sense of style. Hobby attended the Bell School in Lake Forest and graduated from The Ethel Walker School (Simsbury, Connecticut). She completed her bachelor’s degree at Smith College where she was on the Dean’s List and President of her house. She was proud that her only demerit in college resulted from sneaking out of her dorm for a weekend to attend her father’s second marriage in New York City. Upon graduating from Smith, Hobby married Brace Pattou in 1949 and they had one child, Edith. The marriage ended in divorce, and she married Howard C. Shank in 1966. Howard was one of the original “mad men”, an advertising executive who ultimately became President and Chief Operating Officer of Leo Burnett. They lived on the near north side of Chicago and Hobby became involved in several charitable and cultural activities. She was President of the venerable Chicago social service agency Scholarship and Guidance Association. She was also President of the Friday Club and Chair of the Lyric Opera Ball. After 1980, Hobby and Howard divided their time between homes in Lake Forest and Palm Desert, CA. Howard died in 2008. Hobby was a lifelong lover of books and worked in several bookstores, including Chestnut Court in Winnetka and Barbara’s Bookstore in Chicago, located on Wells Street near Second City theatre. She was also a dedicated member of various book clubs over the years. Hobby was a natural athlete, a competitive tennis player who took up golf at age 53, becoming an accomplished and enthusiastic player. One highlight of her golfing career was a hole-in-one at the Pebble Beach Golf Club. Like her mother, Hobby was a passionate gardener and a long-time member of the Chicago Botanic Gardens. She created many beautiful gardens, with a special interest in using plants native to Illinois. She also was an avid bridge player, playing at least four times a week into her 90’s. Before and between her marriages Hobby dated several interesting men, and she loved to tell stories about them around the dinner table. Two highlights were a romance with “The Man from Glad” (i.e., the actor who played him in television commercials), and a date with Sam Wagstaff, later a long-time mentor and companion of Robert Mapplethorpe, who took her to hear Billie Holiday in a New York night club, thus igniting an enduring love of Lady Day. One of Hobby’s proudest accomplishments was her 40 years of sobriety in Alcoholics Anonymous which she credited with profoundly changing her life. She never quite embraced the ‘anonymous’ aspect of the organization because she found it so fulfilling, and she treasured the many people whom she met and mentored. Hobby is survived by her daughter Edith Pattou Emery (Charles), and grand-daughter Vita (Matthew); her step-daughter Sue Nixon, and three step-grandchildren, (Anthony Carlton, Katie and Billy Stover) as well as four beloved nephews, and step-nephews and step-nieces, especially Karen Shank (Toby Lange); and by her dear friend Pirkko Corder. Hobby was pre-deceased by her parents, her husband, her sister, Patricia Jackson, and her step-daughter, Kathe Carlton. A special thank you to her caregivers Dotsy Lewis and Azzure Simpson for their dedication and gentle care. A memorial service will be scheduled at a later date. In lieu of flowers, please send contributions to The Chicago Botanic Gardens https://www.chicagobotanic.org/ and Orphans of the Storm Animal Shelter https://orphansofthestorm.org/ which was founded by Hobby’s great aunt Irene Castle.

The family of Hollis McLaughlin Shank created this Life Tributes page to make it easy to share your memories.

Send flowers to the Shank family.