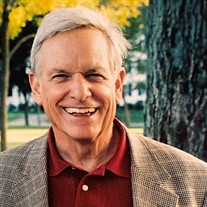 Guy Wyman Wilbor of Lake Forest, Illinois died at the age of 89 on Monday, January 3, 2022. He was born, the only child of the late John and Mary Wyman Wilbor on July 14, 1932 in Milwaukee, Wisconsin. Guy was raised in Highland Park, Illinois, where he attended the Ravinia School and Highland Park High School. He graduated Cum Laude from Amherst College in 1954, where he competed on the Varsity Crew team and was a member of the Kappa Theta fraternity. He was an active alumnus and attended many reunions at Amherst. Guy earned his MBA from The Kellogg School of Management at Northwestern University in Evanston, IL. He was a true entrepreneur and marketer, serving as president of several manufacturing companies. He was founder of GWW Associates, a small financial services company. Guy met Ardie Lowry on a cruise coming home from Europe, and the two were married in Highland Park, IL in April of 1958. During those years he was commissioned in the Army Signal Corps as a 2nd lieutenant stationed in Tobyhanna, PA where, among many other responsibilities, he ran the Officers Club. He and Ardie returned to the Chicago area and settled in their first house in Glenview before moving to their home in Lake Forest in 1968 where they raised their children together. Later in his life, Guy met Connie Addington with whom he enjoyed an eighteen year partnership. Together they had many adventures to far-flung places, and enjoyed visiting their collective children living on the west and east coasts, always making time to stop in Little Compton, RI at the historic Wilbor House, a farmstead dating back to 1690. Guy was a direct descendant of two notable early colonists- William Wilbor and Francis Wyman. A true patriot at heart, he cherished this lineage. Guy was also an avid church goer. He served as an usher at the First Presbyterian Church of Lake Forest for many years, and in recent years became an enthusiastic participant at the Community Church of Lake Forest/Lake Bluff. He loved to fix things and was proud of the volunteer work he did with Habit for Humanity in Waukegan. Guy was always laughing and smiling, and had a passion for politics and golf. He was an enthusiastic Green Bay Packers fan and a reluctant Chicago Bears fan. In his last days he spent time with his oldest friend, Phelps Langtry, then awoke to snow that he tended to before church and coming home to watch his beloved Packers bring home a win. He died peacefully in his home of more than 50 years. Guy is survived by his three children: Scott Wilbor (Kathy), Jenny Carraher (Chris), and Glenn Wilbor (Lisa), as well as five grandchildren; Lauren Wilbor (22), Kylie Wilbor (19), Collin Carraher (26), Chase Carraher (22), Conner Carraher (20), his dear friend Margaret Steed, and many adoring others. A memorial service will be held on Saturday, March 19, 2022, at 2pm at Gorton Community Center, 400 E. Illinois Road, Lake Forest. The service will also be live-streamed at https://www.asimplestreaming.com/gwwilbor In lieu of flowers, memorial contributions can be made to The Community Church of Lake Forest/Lake Bluff at thecommunitychurch.us or PO Box 26 Lake Bluff, IL 60044. For more information, contact Reuland & Turnbough Funeral Directors of Lake Forest at www.RTfunerals.com or (847) 234-9649.

Guy Wyman Wilbor of Lake Forest, Illinois died at the age of 89 on Monday, January 3, 2022. He was born, the only child of the late John and Mary Wyman Wilbor on July 14, 1932 in Milwaukee, Wisconsin. Guy was raised in Highland Park, Illinois,... View Obituary & Service Information

The family of Guy W. Wilbor created this Life Tributes page to make it easy to share your memories.

Guy Wyman Wilbor of Lake Forest, Illinois died at the age of...

Send flowers to the Wilbor family.