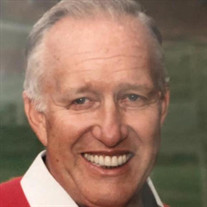 Gerald “Jerry” L. Maatman, Sr., age 91, died on December 1, 2021. Jerry was a man of distinction. He was the beloved companion of Mary Farrell, dearest father to Jerry, Jr. (Erin) and Mary Ellen (Arnie), and adored grandfather of Emily, Taylor, Drew, Katie, Steve, and Rose. He was preceded in death by his sister (Joyce Voecke) and wife, Bernice Maatman. He will be missed by his extended family of nieces (Bonnie and Sue) and nephews (Rob and Tim), and many friends, including his first wife, Dolores Maatman. Jerry was born in Chicago, Illinois on March 11, 1930, to Cora and Leonard Maatman. He grew up in the West Pullman and Roseland neighborhoods, and attended Fenger High School, where he graduated at age 16. He went to the Illinois Institute of Technology, where he played on the varsity baseball and basketball teams and earned a Bachelor of Science in Fire Protection Engineering in 1951. A star centerfielder on the Illinois Tech Scarlet Hawks, he once hit a double off the wall at Comiskey Park as a freshman at age 17. After graduation, he served in the United States Coast Guard as a Lieutenant JG, and worked for a time for the Illinois Inspection and Ratings Bureau, which had funded his college scholarship. In 1958, he returned to IIT as a professor and chair in the Fire Protection and Safety Engineering Department and later served as Dean of Students. During his teaching career, he also served as a consultant to the City of Chicago, and headed the Commission that investigated the McCormack Place fire. He subsequently consulted at Mayor Daley’s request, revising Chicago’s fire safety and building codes and raising the City’s ratings. In 1966, Jerry began working for Kemper National Insurance Company. His initial focus at Kemper was on loss control through workplace safety. He rose in the company, and eventually served as Kemper’s President, and then Chief Executive Officer and Chairman. Over the years, he served on many boards, including Underwriters Laboratories and the National Down Syndrome Society. He was proudest of his work creating and co-chairing the Advocates for Highway and Auto Safety. This coalition of 10 major insurance companies, consumer groups, and auto safety advocates lobbied for strict DUI laws and many of the auto safety features we now take for granted, such as mandatory airbags, seat belts and rollover protections. Jerry was a die-hard Cubs and Bears fan, but the sport he loved best was golf. He was an avid player and fan of the game. One of his joys was handing out the trophy to the winner of the Kemper Open when that event was an annual PGA Tour fixture. Jerry was also a member of Biltmore, Wynstone, and Knollwood Golf Clubs, and served as a board member of the Western Golf Association. Jerry was fiercely devoted to his family, and deeply committed to honesty and integrity in all that he did. He believed in leading by example, and lived by asking: “Can I look in the mirror every morning and feel comfortable with myself?” Funeral services will be at Conway Farms Golf Club, 425 Conway Farms Dr., Lake Forest, IL 60045, at 2:00 p.m. on Tuesday, December 14, 2021 with arrangements by Reuland & Turnbough Funeral Directors, 847-234-9649 or www.RTfunerals.com. Private burial will be at Ascension Cemetery in Libertyville, IL. In lieu of flowers, the family suggests donations to the National Down Syndrome Society, 8 E 41st Street, 8th Floor, New York, NY 10017. Proof of vaccination and use of a mask will be required to attend.

The family of Gerald "Jerry" L. Maatman Sr. created this Life Tributes page to make it easy to share your memories.

Send flowers to the Maatman family.