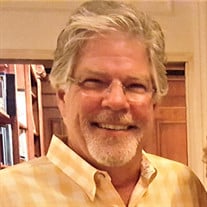 David “Dave” Ralph Bibbs, age 63, a lifelong resident of Lake Bluff and Lake Forest, IL, transitioned peacefully onto his next journey at home on March 30, 2022. December 31, 2021 he was diagnosed with pancreatic cancer. It was three months from diagnosis to death. Dave was born on March 9, 1959 in Lake Forest, IL to Margaret and Robert Bibbs. He graduated from Lake Forest High School (class of ’77) where he was on the golf team. He would have loved to have been a pro golfer, but it wasn't in the stars. He went to University of Iowa, joined Phi Kappa Sigma fraternity, and graduated in 1981 with a BA and in 1982 from the MBA program. Dave was a Senior Vice President at CannonDesign in Chicago, IL and was a structural engineer/structural design leader. Dave always loved buildings and math. He loved and was fascinated by the design and structures of buildings. Dave was a member of SEAOI (Structural Engineers Association of Illinois). He started as an editor with the newsletter, and then joined as a board member in 2000 and served one term as treasurer (2006); president 2007 and 2008; and was on the board until 2011. After leaving SEAOI, he joined the State of Illinois Structural Engineering Licensing Board. He served for 10+ years which included three years as board chairman. He was also a member of the Economic Club of Chicago and a longtime member of Onwentsia Club in Lake Forest, IL, where he was an avid golfer who loved the sport. He participated and placed in many golf tournaments. He could often be found on the 19th hole with fellow golfers, family and friends. Dave absolutely loved his wife’s family’s lodge nestled in the Northwestern woods of Wisconsin, on the Brule River. He loved the Brule more than almost any other place on the planet. It was so serene and tranquil where Dave found absolute peace. He cherished his time with family up there, including relaxing on the river - canoeing and kayaking and various water activities by the dock. Dave also thoroughly enjoyed hikes and walks in the woods, swimming and “golfing” in the river on hot days; hanging out on the screened-in porch or in front of the large stone fireplace, depending on the weather. He loved spotting bald eagles and watching wildlife. A long cocktail hour was always welcomed with ping pong and lots of laughter and fun. He served as Treasurer for 12 years for the family’s corporation, which oversees the administration and operations of the family fishing camp. He was voted in to be the next President (which he was very much looking forward to being) this year. Dave was hopeful to go again this year in September, we were all very hopeful, but it was not in the cards. Dave was married nearly 37 years to the love of his life, and best friend, Katie Frost Bibbs; was a loving father to Mary Frost Bibbs and William (Will) Robert Bibbs. He is survived by his brother Bob (Carol) Bibbs of Virginia Beach, VA, his brother in-law William (Will) Frost (JoEllen) of Anchorage, Alaska and was an uncle of 6. He was preceded in death by his parents and his older sister Barbara Bibbs Holmes and his in-laws, Mary B. Frost and William D Frost. He is also survived by extended family spread across the country from coast to coast, as well as a wide variety of life long dear friends. Katie would like to thank Leanna Cappucci (FL), Victoria McIntosh RN and Dr. Patrick Williams (KY) for their passionate guidance, and their constant support regarding Dave’s health. Dave has truly blessed us with treasured memories impossible to forget. He was such an incredible friend, spouse, and father who will be missed so deeply. His laughter would light up a room. There will be a Celebration of Dave’s Life held at 2pm on Friday, June 24, 2022 at Onwentsia Club, 300 N. Green Bay Road in Lake Forest, IL. Coat and tie required, no denim. Private interment. For information, contact – Reuland & Turnbough Funeral Directors of Lake Forest, 847-234-9649 or www.RTfunerals.com. In lieu of flowers, the family requests memorial donations in Dave’s name be made to either The Chicago Botanic Garden (1000 Lake Cook Rd, Glencoe, IL 60022) or SEAOI – Structural Engineers of Illinois (20 N Upper Wacker Drive STE 750, Chicago, IL 60606).

David &#8220;Dave&#8221; Ralph Bibbs, age 63, a lifelong resident of Lake Bluff and Lake Forest, IL, transitioned peacefully onto his next journey at home on March 30, 2022. December 31, 2021 he was diagnosed with pancreatic cancer. It was three... View Obituary & Service Information

The family of David R. Bibbs created this Life Tributes page to make it easy to share your memories.