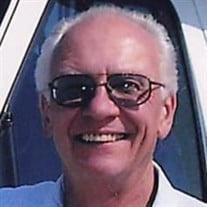 David John Artac surrounded by his loving family passed away on March 1, 2022. David was born in Waukegan, Illinois on November 14, 1940, to John, Sr. and Hilda (nee Pustaver). He was educated at Saint Joseph grade school and graduated from North Chicago high school in 1958. Dave also graduated from CLC in data processing as well as a real estate broker and he attended M.I.T. for printing. Dave had many part-time jobs; North Chicago Post Office, Tenth Street Hardware, CBS Realtors and retired from West Group Law Publishing as a master printer and in RD Electronic Typesetting in 2000 after 37 years. Beginning in 2002 he began working for PACE, First Transit, Laidlaw and MV Transportation with a CDL license for Abbott and AbbVie as a shuttle bus driver (nicest bunch of people he ever worked with). When Dave was 14 years old, he met his sweetheart Janet and they went together until they got married on September 23, 1961, at St. Joseph Church in Waukegan. Dave and Janet had three sons, Todd, Jay (died in 2009) and Jeff. They lived in Waukegan for 28 years before moving to Winthrop Harbor. After Janet died in 2016, he continued her daily feeding of the birds and animals in their flowered backyard. Dave’s greatest job was spending time with his granddaughters Sofia and Julia making, painting, and hanging bird and squirrel houses in David’s backyard woods and gathering with them and just going with them to different places anytime. “Janka, I always loved you, even when you were 15 years old you were my everything, now you are gone and I know you will be waiting for me, You’re ever lover Davea.” Dave was surely hugged at the gate by his son Jay while Janet his wife waited patiently for her turn. What a homecoming it was! We rejoice that Dave has no pain and loved ones surround him. Dave, his sense of humor, laughter, strong legacy, and family ties will be missed very very much by all who knew him and loved him. Dave is survived by his sons Todd (the late Kim, died 2021) of Wisconsin and Jeff of Winthrop Harbor, WI; former daughter-in-law Anne Iacubino of Lake Bluff, granddaughters Sofia and Julia; his brother John (Linda) of Arizona and many nieces and nephews. A visitation will be held Friday, March 11, 2022 from 10:00 a.m. until the time of Mass at 11:00 a.m. at Our Lady of Humility Catholic Church, 10655 W. Wadsworth Rd., Beach Park, IL. Following the Mass there will be a private family burial at Ascension Cemetery, Libertyville, IL. In lieu of flowers please send donations to your favorite Humane Society. For additional information contact Reuland and Turnbough Funeral Directors of Lake Forest www.RTfunerals.com or 847-234-9649.

David John Artac surrounded by his loving family passed away on March 1, 2022. David was born in Waukegan, Illinois on November 14, 1940, to John, Sr. and Hilda (nee Pustaver). He was educated at Saint Joseph grade school and graduated from... View Obituary & Service Information

The family of David J. Artac created this Life Tributes page to make it easy to share your memories.

David John Artac surrounded by his loving family passed away...

Send flowers to the Artac family.