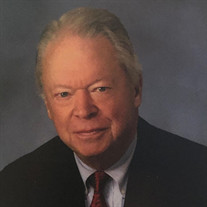 Loving husband, father, grandfather, and brother, Charles F. Clarke, Jr. died on January 1st of natural causes at 90 years of age. Born in Chicago, Illinois on March 3, 1929 to Virginie Dennehy Clarke and Charles F. Clarke, Sr., Charley attended the Bell School (class of 1942), Canterbury School (class of 1947), and finally Brown University (class of 1951) where he majored in Classics and made many friends in the DKE fraternity. Following college, Charley served as a Second Lieutenant in the Army during the Korean War from 1951 to 1953. Once he left the service, Charley soon began his distinguished career in Chicago real estate. He began at Arthur Rubloff & Co in 1956 and eventually became Vice President in 1963. He was recruited by Sudler & Co in 1965, a firm known primarily for its residential property management in Chicago. His first big assignment was to lead the team to manage and lease the new John Hancock Center building, then the world’s tallest, which was completed in 1969. He then went on to work on another major multi-use complex, Water Tower Place. Charley continued to work in commercial brokerage at Sudler for thirty-nine years. In conjunction with his professional life, Charley served on the boards of the Mid City Bank, Verado Energy, and the Greater North Michigan Avenue Association. Charley met Ellie in 1958 when he was asked to escort her to a cousin’s bridal dinner in Lake Forest. Their first date was the next day at the wedding. Charley lost no time and, six weeks later, he proposed. They were married on January 3rd, 1959 in Palm Beach, Florida. They were married for 61 years. Charley believed fervently in service and had a long life of philanthropic work. He served on many non-profit boards: Canterbury School, The Rehabilitation Institute of Chicago, Catholic Charities (as President), Onwentsia Club (as President), the Otho S.A. Sprague Memorial Institute (as President), Barat College, and Lake Forest Hospital. He also worked diligently for the City of Lake Forest, where he lived most of his life. He was on the Lake Forest City Planning Commission and its Zoning Board of Appeals and, finally, Charley served as Mayor of Lake Forest from 1990 to 1993 (as had his father 1943-1946). Charley was an outdoorsman and loved traveling with his wife, kids, and grandkids, especially their time together out west in Telluride, Colorado. From the age of nine until around seventeen, he spent the month of July as a ranch hand on his Aunt Sunny and Uncle Gratiot’s ranch, called Hotfoot, named after a college drinking society. Among the many friends he had at Canterbury, one was Pat Hemingway, the son of Earnest. One year, Charley spent his spring break in Havana, Cuba where he went deep sea fishing, hunting, and drank frozen daiquiris at the Floridida bar with father and son Hemingway. He gave his children a love for nature with many trips out west skiing, camping, hunting, fishing, and horseback riding. Family trips to Europe and Ireland were had and, once his work life slowed down, Charley and Ellie enjoyed trips to Eastern Europe, Asia, Africa, South America and Australia and New Zealand. In 1984, Charley and Ellie bought property in Telluride, Colorado, which they named Hot Foot in honor of the ranch he worked at as a boy. Charley’s love of the outdoors and the American West was infectious and was passed onto his children and grandchildren. Charles is survived by his wife of sixty-one years, Eleanor O’Connor Clarke; his sister Louise Clarke Hough; his three children, Charles F. Clarke, III, his wife Vanessa Balbach Clarke, Timothy S. Clarke, and Jay A. Clarke; his seven grandchildren, Arlo, Darby, Chase, Haley, and Ben Clarke, and Liam and Cora Bradley; and many beloved nephews, nieces, and cousins. He is pre-deceased by his daughter Eleanor M. Clarke, his parents, his brothers John Clarke and Thomas Clarke and his sister Patricia Clarke Flynn. He was immensely dedicated to, and proud of his wife, kids, and grandkids. May he rest in peace. A funeral mass will be held at 4:30 p.m. on Friday, January 17, 2020 at the Church of St. Mary, 175 East Illinois Road, Lake Forest. Interment will be private at St. Mary Cemetery in Lake Forest. Funeral arrangements by Reuland & Turnbough Funeral Directors of Lake Forest, 847-234-9649 or www.RTfunerals.com. In lieu of flowers, donations can be made to the Catholic Charities of Chicago (721 N. LaSalle, Chicago, IL 60654) or the Canterbury School (101 Aspetuck Ave, New Milford, CT 06776).

The family of Charles F. Clarke, Jr. created this Life Tributes page to make it easy to share your memories.