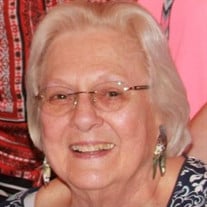 Not sure what to send?

Carole Sporer Stroh, age 91, a longtime resident of Lake Bluff, Illinois passed away on June 4, 2022 in Thessaloniki, Greece, while doing what she loved – traveling. She and a group from the Church of St. Mary had just visited the House of the Virgin Mary, a Catholic shrine located on Mt. Koressos in the vicinity of Ephesus. She was born May 17, 1931 in Detroit, MI to Francis and Sara Viola Sporer. In 1952 she graduated Magna Cumulate from Siena Heights College with a B.A. in English and minors in French and Latin, finishing in three years. The next year she was awarded an M.A. in English Language and Literature from the Rackham School of Graduate Studies of the University of Michigan. She married Alfred Stroh, Jr., a naval officer, on September 15, 1956; they had met on Guam where she was teaching English and he was stationed there with the U.S. Navy. Cal, as her friends knew her, was a devoted wife and mother, accompanying her husband and their growing family to numerous Navy bases in the US and abroad, including giving birth to their third child, Elizabeth, while he was away serving in Vietnam. In total, Cal and Alfred had four children. When Alfred retired from the Navy in 1973, they moved to Lake Bluff. Their children ranged from elementary to high school age at that time, making Cal the CEO of the household as her husband started a new career in the civilian world. In 1981, at the age of 50, she returned to her passion of teaching. Serendipitously, she was made aware of an opening for a Latin teacher at Mundelein H.S. (IL). She taught Latin and Spanish for 20 years there, only retiring due to the mandatory retirement age. Cal subsequently served as a substitute language teacher at Mundelein H.S., Carmel Catholic H.S., and the School of St. Mary well into her early 80s. Cal was always active in her local community. She served as a trustee on the board of the Lake Bluff Library from May 2005 to April 2021 – 16 years and four terms; she was the longest serving Trustee in the Library’s history. A devoted member of the Church of St. Mary in Lake Forest, Cal was a long-serving lector and joined the Parish Council in the fall of 2018. She loved needlework and would crochet hats and mittens and donate them to various charities. In the late 1960s and into the 70s, during her time as a Navy spouse, she taught crochet, needlepoint, and macramé for the Great Lakes Naval Base Navy Exchange. Cal would also donate clothing to Navy Relief and contribute to numerous food drives. Beloved wife of 66 years of the late Alfred Stroh, Jr. (2014); adored mother of Mark (Debra) of Adrian, MI; Gregory (Ann) of Leland, NC; Dr. Elizabeth Bloom (Carl) of Fulshear, TX; and Edward (Stacy) of Minnetonka, MN; caring grandmother of Brooke and Courtney Bloom, Mark Nathan “Elmo” Stroh, Addison and Ellison Stroh; special step-grandmother of Bryona Smith and Yvonne Wall; sister of William, Mary, Joseph, and Thomas. Memorial Visitation from 10:00 a.m. until the 11:00 a.m. Funeral Mass on Friday, July 1, 2022 at the Church of St. Mary, 175 E. Illinois Road, Lake Forest, IL 60045. Out of respect for the family, please wear a face mask. Interment at Fort Sheridan National Cemetery. Cal was generous with her charitable giving and would encourage all to donate to the charity of your choice. The Funeral Mass will be live-streamed for those unable to attend in-person at: https://www.facebook.com/ChurchofStMaryLF/videos/ For information – Reuland & Turnbough Funeral Directors of Lake Forest, 847-234-9649 or www.RTfunerals.com.

Carole Sporer Stroh, age 91, a longtime resident of Lake Bluff, Illinois passed away on June 4, 2022 in Thessaloniki, Greece, while doing what she loved &#8211; traveling. She and a group from the Church of St. Mary had just visited the House... View Obituary & Service Information

The family of Carole Sporer Stroh created this Life Tributes page to make it easy to share your memories.

Send flowers to the Stroh family.