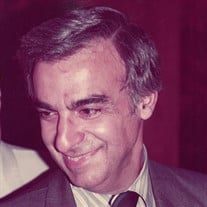 Byron C. Karzas died at the age of 93 on July 31, 2019 under Hospice care, comforted by his family. He struggled with Alzheimer’s for many years and spent the last 4 years in Memory Care. He was a devoted and loving husband and father; Byron is survived by his wife of almost 67 years, Diane, (née Stathas), and daughter, Mary Kay Karzas (Warren Reiss). He was preceded in death by his mother, Kakia Kakoyanni Karzas Smainis, stepfather, George Smainis, father, Andrew Karzas, who was the developer of the Chicago Aragon and Trianon Ballrooms, and brother, William. He was raised in Chicago, living in the Jackson Towers and on Woodlawn Ave. Byron served in the Navy, 1944-46, at Pearl Harbor, as a radio engineer on submarines. After his service he attended California Institute of Technology, graduating in 1949 with a degree in Applied Chemistry. Returning to Chicago after Caltech, he joined the family Ballroom business as Assistant Secretary of the Aragon Ballroom. He enjoyed having the opportunity to know many of the renowned Big Band Leaders, watching some (for example, Wayne King and the Dorsey Brothers) develop into legendary careers. After marrying in 1952, he worked for North Shore Gas Company, beginning in 1953. He then joined Duff & Phelps, INC in 1956, becoming a Chartered Financial Analyst & Professional Engineer; ultimately serving as Vice President (since 1967) and Secretary until his retirement in 1987. Byron was known for his quiet wit and sense of humor; he was a genuine and kind gentleman. He was an enthusiastic traveler, wine connoisseur, tennis player, and Bridge player. He was happy to don his formal attire and dance, having grown up in the Ballroom business and the Big Band era. Introduced to Cubs games with his father, he became a lifelong sports fan, following the Cubs, the Chicago Bears and Northwestern Football. As a Bears and Wildcat season ticket holder for many years through the good and “not so great” eras, he enjoyed taking family (especially his daughter) and friends to games. Memorial service on Friday, August 16, at 11:00 AM, The Church of The Holy Spirit, 400 E. Westminster, Lake Forest. In lieu of flowers, memorial contributions may be made to Caltech “Blacker House Endowment”, 1200 E. California Blvd, Pasadena, CA 91125. (www.caltech.edu) Funeral arrangements by Reuland & Turnbough Funeral Directors of Lake Forest www.RTfunerals.com or (847) 234-9649.

Byron C. Karzas died at the age of 93 on July 31, 2019 under Hospice care, comforted by his family. He struggled with Alzheimer&#8217;s for many years and spent the last 4 years in Memory Care. He was a devoted and loving husband and father;... View Obituary & Service Information

The family of Byron C. Karzas created this Life Tributes page to make it easy to share your memories.

Send flowers to the Karzas family.