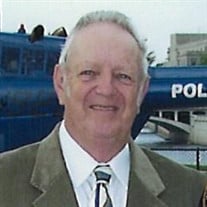 Bernard Augustine Walther, 87, passed away January 1, 2021 at his home. Bernie was born on November 24, 1933 in Concord, MA to Augustine and Elizabeth Walther. He was raised in Acton, MA and during his youth, worked on a vegetable farm and was a soda jerk. In the 50’s Bernie moved to Lake Forest, IL where he held various jobs such as a landscaper, chauffeur, movie projectionist, and pinsetter at the local bowling alley. He married Ruth Boutin in 1958 and they shared 62 years of marriage together. He began his civic career as a firefighter for the Lake Forest Fire Department and then became a Deputy Sheriff for the Lake County Sheriff’s office and retired in 1987 after 23 years of service. His distinguished career includes the Award of Valor from the Illinois Police Federation and Selective Service System award for providing 20 years of loyal and faithful service. After retirement, Bernie continued to work for well-established families in Lake Forest doing landscaping, odd jobs, and special projects. He was also known to be a very loyal and helpful friend to many neighbors and close friends. Bernie was passionate and very meticulous about his yard and created stunning flower beds and bountiful vegetable garden that surrounded the house. He received several recognition plaques for his participation in the Waukegan’s annual Christmas home decorating showcase. He was extremely proud when he donated a blue spruce tree that grew in his own front yard to the city of Waukegan for the community to decorate and enjoy. He also had a love for local politics and often attended council meetings where he always provided his perspective on the way things should be done. Bernie enjoyed spending time with his wife, Ruth, and his family. He also had a special bond with their dog Sasha, whom he loved so dearly. He is preceded in death by his parents and brothers Francis, Joseph, Leonard, and sisters Meltha (Burke), Henrietta (Plunkett), Celine (Holly). He is survived by his wife Ruth; daughter Bernadette, Sons Bernard Jr. (Jacqueline), and Joseph; grandchildren Ian, Grayson and Sydney, sister Clare (Coleman), and many nieces and nephews. As per his wishes, there will be no services or visitation. In lieu of flowers memorial contributions in his name may be made to PAWS, 1616 Deerfield Road, Highland Park, IL 60035, Save-A-Pet, Inc. 31664 N. Fairfield Road, Grayslake, IL 60030, or Alzheimer’s Association at 225 N. Michigan Avenue, Floor 17, Chicago, IL 60601. For additional questions or information, please contact Reuland & Turnbough Funeral Directors of Lake Forest at (847) 234-9649 or www.RTfunerals.com.

Bernard Augustine Walther, 87, passed away January 1, 2021 at his home. Bernie was born on November 24, 1933 in Concord, MA to Augustine and Elizabeth Walther. He was raised in Acton, MA and during his youth, worked on a vegetable farm and... View Obituary & Service Information

The family of Bernard "Bernie" A. Walther created this Life Tributes page to make it easy to share your memories.

Send flowers to the Walther family.