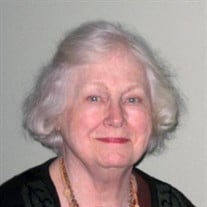 Bernadine Rose Rice, 91, passed away January, 12, 2021. Bernadine was born in Waukegan, Illinois on October 29, 1929. She was nicknamed “Tiny” by her siblings at birth for being a tiny baby, and the name stayed with her throughout her lifetime by family members. Bernadine spent her youth growing up with her siblings in Waukegan and graduated from Waukegan High School. After World War II, Bernadine met her future husband, a lifelong Lake Forester named Tony (“Bud”) Cascarano on a Chicago and North Western train while returning home from a daytrip to Chicago. He was returning home from school at the Art Institute. They married in 1947 and began a family soon thereafter. Tony’s work as an industrial designer moved them to Detroit for several years before transferring back to the north suburbs. They built a house in Lake Forest in 1958 that remained their family home for the next 62 years. While raising her three children, Bernadine worked as a seamstress out of her home for many years finishing needlepoint items such as pillows and rugs for prominent Lake Forest women who enjoyed the hobby. Bernadine loved to cook, and there was little she couldn’t master. She especially delighted in hosting large family dinners or afternoon teas that filled her home. Nearby family, out of town relatives, and neighbors were all welcome. Baking was her specialty, creating elegant breads, cakes, cookies, and everything in between. Her Christmas stollen was a favorite for all. Family was everything to her. Known as “Grandma B”, she loved telling stories to her grandchildren and great-grandchildren, and teaching them how to make gingerbread cookies shaped like dinosaurs. Bernadine was challenged by health limitations in her later years. But two bad knees and macular degeneration didn’t keep her from living independently. With her husband’s passing four years earlier, she remained in her home until her last days cooking a meal for all who would come by. Bernadine was preceded in death by Anthony John Cascarano, her husband of 69 years, a brother Robert (IvaDell) Rice, and sisters Margaret (Leonard) Stanulis and Elizabeth Rice. She is survived by her three children, Sherry Miller, James Cascarano (Deborah), and Brian Cascarano (Tracey). She is also survived by seven cherished grandchildren – Meredith Hayes (James), James Miller (Janet), Carrie Spezzano (Matt), James Cascarano, Jr. (Jenna), Patrick Cascarano, Sean Cascarano, Brennan Cascarano, and six great grandchildren, Grace Hayes, Caroline Hayes, Liam Hayes, Evan Spezzano, Blake Spezzano and Jetson Miller. A private interment will be held at Lake Forest Cemetery. In lieu of flowers, memorial donations may be made to Friends of Lake Forest Library, 360 E. Deerpath Road, Lake Forest, IL 60045.

The family of Bernadine R. Cascarano created this Life Tributes page to make it easy to share your memories.

Send flowers to the Cascarano family.