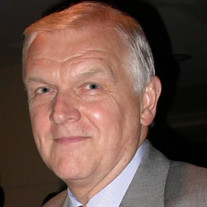 Andrew David Bunta, MD, age 79, a 45-year resident of Lake Forest, IL, died in Lake Forest on Thursday, February 24, 2022. Dr. Bunta was the beloved husband of Susanna Guenther Bunta; they were married more than 56 years. He was the loving father of Elizabeth Bunta Haussman Bartels (Gilpin Bartels) of Bryn Mawr, PA, and of Maria R. Bunta of Chicago, IL. He was the devoted grandfather of Charles B. Haussman and James R. Haussman, both of Bryn Mawr, PA. Dr. Bunta was born in Chicago on August 2, 1942, to the late Muriel Schepler Bunta and the late Andrew William Bunta. His younger brother, Theodore Alan Bunta, preceded him in death. After earning his bachelor’s degree from Northwestern University in 1964, Dr. Bunta graduated from Northwestern University Feinberg School of Medicine in 1967. He served as a General Medical Officer with the United States Air Force in Minot, ND, from 1968 to 1970. Dr. Bunta then completed his residency training in orthopaedic surgery at Northwestern in 1974 and joined the Feinberg faculty as an instructor in orthopaedic surgery the same year. Dr. Bunta practiced orthopaedic surgery at Lutheran General Hospital in Park Ridge, IL, until 1999, where he simultaneously served as the director of the Division of Orthopaedic Surgery and director of Feinberg’s orthopaedic residency rotation at Lutheran General. In 1999, Dr. Bunta joined the medical staff at Northwestern Memorial Hospital (NMH) as an attending physician in orthopaedic surgery. From 1999 to 2015, he served as vice chairman of the Department of Orthopaedic Surgery and as associate program director of the orthopaedic surgery residency program. Most recently, he served as medical director of the Northwestern Memorial Hospital Orthopaedic Unit in Feinberg Pavilion, and then as medical director of Clinical Documentation at NMH and Northwestern Medicine Lake Forest Hospital. Throughout his career, Dr. Bunta earned wide recognition for his leadership within the field of orthopaedic surgery, and for his commitment to patients, colleagues, and students alike. He held various leadership positions for the Northwestern University Medical Alumni Association over the years – including serving as president from 2001 to 2003 – as well as at the American Orthopaedic Association (AOA). From 2007-2013, Dr. Bunta served as the inaugural chairman of the AOA Own the Bone Steering Committee, which guides Own the Bone, a nationally recognized quality improvement and secondary fracture prevention program. In 2012, Dr. Bunta was honored to receive Feinberg’s Alumni Faculty Lifetime Achievement Award. Dr. Bunta was named a “Pillar of the Orthopaedic Profession” by the AOA in 2021— the first Feinberg faculty member to receive this honor. Founded in 1887, the AOA is a community of orthopaedic surgeons committed to developing leaders, strategies, and resources to guide the future of musculoskeletal care. Funeral services for Dr. Bunta will be held this spring in Lake Forest. Arrangements by Reuland & Turnbough Funeral Directors of Lake Forest, www.RTfunerals.com or 847.234.9649. In lieu of flowers, please honor Dr. Bunta by making a gift online at: https://giving.northwestern.edu/DrBunta or sending a check payable to Northwestern University Feinberg School of Medicine, with “Dr. Bunta” noted on the memo line. Please mail checks to the following address: Northwestern University Feinberg School of Medicine, Attn: June Ulrey, 420 E. Superior Street, NU-Rubloff 9, Chicago, IL 60611

Andrew David Bunta, MD, age 79, a 45-year resident of Lake Forest, IL, died in Lake Forest on Thursday, February 24, 2022. Dr. Bunta was the beloved husband of Susanna Guenther Bunta; they were married more than 56 years. He was the loving... View Obituary & Service Information

The family of Andrew D. Bunta M.D. created this Life Tributes page to make it easy to share your memories.